(G)I-DLE is prepared to top the charts: With their latest release, the group hopes to make its mark in the K-pop world

(G)I-DLE is prepared to top the charts: With their latest release, the group hopes to make its mark in the K-pop world 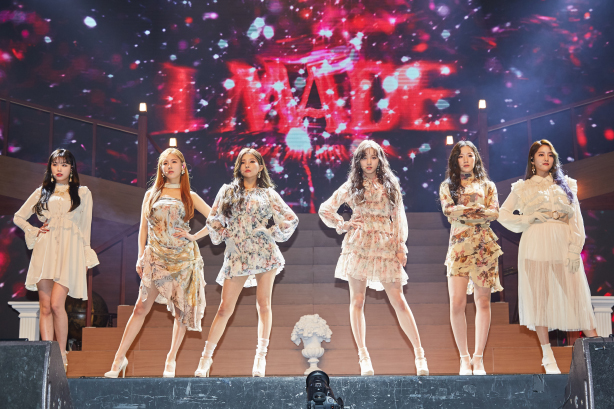 (G)I-DLE performs songs off of its new EP, “I Made,” for the first time Tuesday at the Blue Square iMarket Hall, central Seoul. From left are Soojin, Miyeon, Soyeon, Yuqi, Shuhua and Minnie. [CUBE ENTERTAINMENT]

It’s been less than a year since girl group (G)I-DLE made its debut, which explains why it doesn’t have many releases to its name - one EP and two singles, to be precise. But despite the lack of quantity, it can be argued that the group has an excess of quality songs. Most K-pop fans can hum along to the addictive melodies of “Latata” (2018) and “HANN (Alone)” (2018), two songs that have caught people’s attention for their unique sounds and the high quality performances staged by the group’s six members: Soyeon, Miyeon, Minnie, Soojin, Yuqi and Shuhua.

On Tuesday, (G)I-DLE released its second EP, titled “I Made,” which features five new songs, including the title track “Senorita.” The group performed music from the EP live for the first time for local press at Blue Square iMarket Hall, central Seoul, before its official release at 6 p.m.

“We introduced ourselves with our [first EP] ‘I Am’ last year, and now we will show what we have done with ‘I Made,’” said Soojin.

“I think it’s hard to define exactly what this song is like,” said Soyeon. “But ‘Senorita’ is full of all our personalities. It’s different from our previous songs and a lot stronger.”

“Senorita” is an upbeat dance pop track with deep bass and piano sounds that add an emotional touch, and was composed by member Soyeon and producer Yummy Tone. Soyeon has already proven her talents as the songwriter of the group’s past two successes with “HANN” and “Latata.” She also helped write four tracks on the new EP, and Minnie also contributed by writing “Blow Your Mind,” which was released on Feb. 19.

“It’s the first time a song that I wrote has been released. I worked with producer duo Flow Blow to make this R&B pop sound. I think that this song works well with the unique voices of our members. We even shot the music video by ourselves, while we were together in San Francisco,” Minnie said.

Gamers will be especially familiar with Soyeon and Miyeon’s voices, since they were featured in “Pop/Stars” produced by Riot Games for the 2018 League of Legends World Championship finals. The two flaunted their talents along with Madison Beer and Jaira Burns to perform at the world’s largest annual Esports event, proving that they were more than just young K-pop rookies.

When asked how she feels when she writes her songs, Soyeon said, “I think a person looks their best when they’re confident about themselves. I have a lot of different sides of myself. Sometimes I am shy, sometimes I get angry and sometimes I’m confident. But I think my confident side comes through the most when I’m writing songs.”

Though the group may have just celebrated its 300th day in the entertainment industry two days ago, it’s now ready to take off its rookie label and morph into big-time group with its own distinct (G)I-DLE flavor.

“I think we can pull off any song that we get, because we’re so diverse. We are so different from each other, and each part sounds so different [in every song]. At the end of the day, I think that the difference makes us shine,” said Soyeon.

“We are not worried about how our songs perform [on the charts], because we’re doing the kind of music that we’ve always wanted to do,” said Yuqi.

“But we do hope that we can top the charts this year with songs that we’ve written - just like this one.”