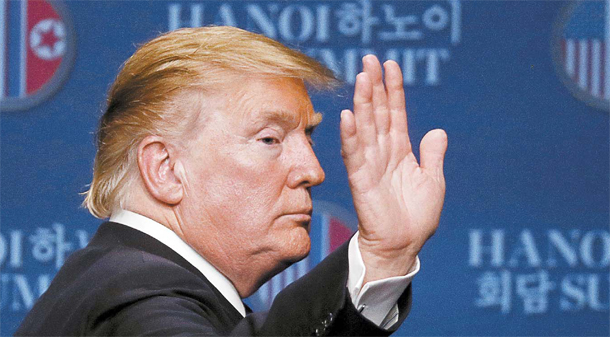 U.S. President Donald Trump waves during a news conference at the JW Marriott Hotel after his summit with North Korean leader Kim Jong-un in Hanoi, Vietnam, on Thursday. [REUTERS/YONHAP]

U.S. President Donald Trump and North Korean leader Kim Jong-un’s second summit in Hanoi was cut short Thursday afternoon, as the leaders walked away from the talks without a nuclear deal after failing to narrow their differences over sanctions relief in exchange for denuclearization measures.

Trump said that the reason why he walked away from the talks without signing a joint statement was because Kim demanded that all sanctions on the regime be lifted while Washington demanded more from Pyongyang than the dismantlement of the Yongbyon nuclear complex, in a press conference held at the JW Marriott Hotel.

“Basically they wanted the sanctions lifted, in their entirety, and we couldn’t do that,” said Trump. “They were willing to denuke a large portion of the areas that we wanted, but we couldn’t give up all of the sanctions for that. So we continue. But we had to walk away from that particular suggestion.”

The two leaders kicked off the second day of their summit around 9 a.m. Thursday at the Sofitel Legend Metropole Hanoi, a French colonial-era luxury hotel, with one-on-one and expanded meetings. But Kim and Trump returned back to their hotels after abruptly canceling a luncheon and signing ceremony initially scheduled for later that afternoon without reaching any sort of nuclear deal in Hanoi. They did, however, leave the door open to continued diplomacy toward denuclearization.

Trump, during the press conference, confirmed that Kim had offered to dismantle facilities at Yongbyon, but that it was not enough to lift the sanctions on North Korea.

“He would do that, but he wants the sanctions for that, and as you know, there is plenty left after that,” said Trump. “That particular facility, while very big, wasn’t enough to do what we were doing. We had to have more than that.” He indicated this could involve the North’s undisclosed uranium enrichment plants.

“We had to do more than just the one level,” he said, and that Washington is not willing to “give up all that leverage that has taken a long time to build.” Trump added, “I want to take off the sanctions so badly because I want that country to grow.” 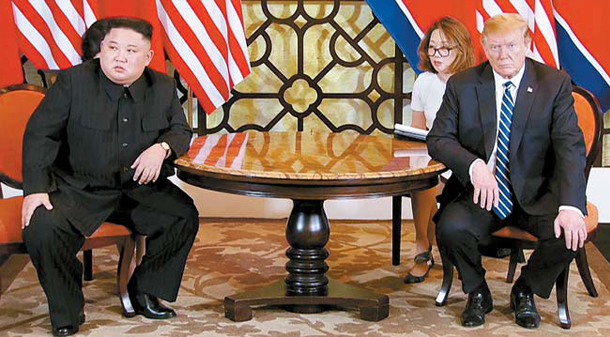 There were expectations that the two sides may produce a Hanoi declaration in which North Korea may offer to freeze or dismantle facilities at its key Yongbyon nuclear complex, which is also the site of its only plutonium-producing reactor as well as a uranium enrichment facility. Washington also was expected to provide some corresponding measures to guarantee the North’s security.

However, North Korea had been insisting on an easing of sanctions, which the United States has been reluctant to do until its complete denuclearization. There had been anticipation that the two sides could agree on a declaration to end the 1950-53 Korean War or open liaison offices, considered a first step toward normalizing bilateral diplomatic ties.

But Trump’s visit to Vietnam came under domestic pressure not to offer Pyongyang too many concessions and also amid an explosive testimony by his former lawyer and fixer Michael Cohen, who was sentenced to a three-year prison term, in front of Congress Wednesday. Trump criticized the timing of the testimony during the press conference. U.S. Secretary of State Mike Pompeo, who stood by Trump at the press conference, added that there were “also timing and sequencing issues that were associated as well which we didn’t quite get across the finish line.”

Pompeo added that dismantling the Yongbyon facility, “which is important for sure, still leaves missiles, warheads and weapons systems and other elements that we couldn’t get to today,” such as the declaration of its nuclear arsenal and facilities.

Pompeo, who has helmed nuclear diplomacy with the North, said that signing a deal that day did not “ultimately make sense” for the United States, that they had asked Kim to “do more” and that he was “unprepared to do that.”

But Pompeo added that he is still “optimistic” and “hopeful that the teams would get together in the days and weeks ahead [to] continue to work out a complex problem” to make progress to achieve what the world wants: “ultimately, to denuclearize North Korea, and to reduce risk for the American people and people all around the world.”

While Trump said he decided it “wasn’t a good thing to be signing anything,” they had a “productive time,” and that “sometimes you have to walk, and this was one of those times.”

He called Kim Jong-un “quite a guy and quite a character,” saying that their “relationship is very strong” still. He continued that they walked away from the dialogue table amicably and said, “We had some options, and at this time, we decided not to do any of the options.”

Trump also said Kim pledged he will continue not to conduct any nuclear and missile tests, noting, “I trust him and I take him at his word.”

Trump, however, left the future of joint military exercises between Seoul and Washington, which have been protested by North Korea, ambiguous. Major joint exercises have been suspended following the June 12 Singapore summit in the spirit of the ongoing denuclearization diplomacy.

“The military exercises, I gave that up quite a while ago because it costs us a hundred millions dollars every time we do it,” said Trump, saying that flying in “massive bombers in from Guam” was expensive, as he did in the June 12 press conference in Singapore.

“I could have 100 percent signed something today,” said Trump. “We actually had papers ready to be signed, but it wasn’t appropriate. I’d much rather do it right than do it fast.”

Trump said that denuclearization to him was “to get rid of the nukes.” He went on to reiterate his belief in the potential of North Korea, adding it has an “incredible location - on the one side you have Russia and China, on the other side you have South Korea, and you are surrounded by waters, and among one of the most beautiful shorelines in the world … I think it’s going to be an absolute economic power.”

Likewise, Trump said, “I don’t want to talk about increasing sanctions. They’re strong. There are a lot of great people in North Korea that have to live, also. My whole attitude changed a lot, because I got to know Chairman Kim very well.” His remarks left open possible future negotiations with the North on sanctions.

Trump left Hanoi on Air Force One shortly after the press conference, while North Korean leader Kim remained at the Melia Hotel, as he is scheduled to carry out his official visit to Vietnam today and tomorrow, according to the Vietnamese Foreign Ministry.

The two leaders reunited the previous evening eight months after the June 12 Singapore summit and had dinner together for the first time.

After talks the following day, their luncheon had been scheduled for around noon at the Metropole’s Le Club restaurant. The extended meeting between Kim and Trump and their aides, however, ran over schedule.

Soon after, Sarah Huckabee Sanders, the White House press secretary, said in a statement, “No agreement was reached at this time, but their respective teams look forward to meeting in the future.”

The two leaders, she said, “had very good and constructive meetings in Hanoi and that they “discussed various ways to advance denuclearization and economic driven concepts.”

Earlier that morning, the atmosphere had been lighter. Trump, seated with Kim, said to reporters ahead of their one-on-one talks that he is in “no rush” for the denuclearization of the North, and said, “Speed is not that important. To me, I very much appreciate no testing of nuclear rockets and missiles.”

Kim told reporters, “We had made a lot of effort so far and thought now is the time to show this, which is why we came to Hanoi and continue the wonderful dialogue for a second day.”

“If I’m not willing to do that, I wouldn’t be here right now,” Kim said responding to a reporter’s question on his intention to denuclearize.

Following the one-on-one bilateral talks, which lasted around 30 minutes, Kim and Trump took a brief stroll outside through the hotel gardens amid humidity and heat, accompanied only by interpreters. They were spotted chatting briefly by the hotel’s pool with U.S. Secretary of State Mike Pompeo and Kim Yong-chol, the vice chairman of the North’s ruling Workers’ Party’s Central Committee, who also oversees inter-Korean affairs.

The two leaders entered the expanded meeting at around 9:45 a.m. accompanied by close aides and negotiators, where they were expected to narrow differences on steps toward the denuclearization of North Korea in return for corresponding measures from the United States.

Trump told reporters that the opening of liaison offices in each country is a “good idea,” something Kim also agreed to. Pompeo, U.S. national security adviser John Bolton and White House Chief of Staff Mick Mulvaney were seated at the table, as were Kim Yong-chol and North Korean Foreign Minister Ri Yong-ho.

Seoul “regrets” that the North Korean and U.S. leaders could not reach an agreement in the summit, said Kim Eui-kyeom, the Blue House spokesman, in a statement. “But it also appears that they have clearly made more meaningful progress than at any time in the past.”

He noted that President Trump discussing the “issue of sanctions relief in relationship to denuclearization of the North” was a sign that the two sides were able to take their discussions “to another level.”

South Korean President Moon Jae-in was briefed by Trump on the results of the summit over telephone Thursday evening, almost immediately after Trump departed for Washington on Air Force One.