Park tears through the field for Singapore win

Park tears through the field for Singapore win

Park Sung-hyun picked up her first win of the season in only her second appearance this year, storming to victory at the HSBC Women’s World Championship at Sentosa Golf Club, Tanjong course in Singapore on Sunday. 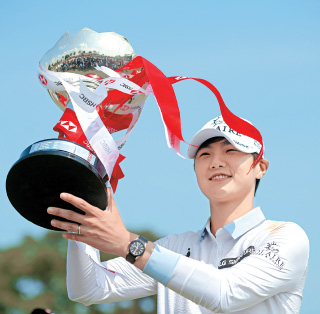 Park’s win was impressive as she shot eight under par, 64, in the final round for a come-from-behind victory. She made nine birdies and a bogey on the last day to finish the tournament at 15 under par, 273.

Park, who started the final round four shots behind leader Ariya Jutanugarn of Thailand, wasted no time in climbing her way up the leaderboard, beginning her day with three consecutive birdies.

She birdied the sixth and seventh holes before adding her first bogey of the day on the par-five eighth. She added more birdies on the 10th, 13th and 14th. Another at the par-five 16th allowed her to extend her lead by two shots ahead of Minjee Lee of Australia.

As Lee, who was playing in the last group, failed to overcome Park’s lead, the Korean star took the tournament title. For a second straight week, Lee finished as runner-up.

World No. 1 Jutanugarn had a disappointing final round of three over par to finish the tournament tied for eighth.

“So last year, my shots and like overall thing was pretty unstable in the beginning of the season and I think my training in the last winter really helped me a lot,” Park was quoted as saying on the LPGA website. “It also helped me to be stronger with my play.”

Looking at Park’s past two seasons on the LPGA Tour, she has always struggled at the beginning of the season.

Although Park reached the No. 1 spot in the world ranking last year, she didn’t really find her stride until May, when she finally picked up her first win. Following that first victory, she missed the cut in three consecutive tournaments, but in June she picked up her second victory of the season, a major tournament.

Park added another win in August to reach the No. 1 spot in the world ranking and maintained it until Jutanugarn overtook her in October.

Even in her rookie season, Park’s first victory wasn’t until July, at the U.S. Women’s Open.

This year, her first victory came a lot earlier than expected, meaning that her goal of winning five tournaments, including a major, this year is looking more likely than ever.

“I didn’t think I would win this fast,” Park was quoted as saying. “I think I will play really comfortable the rest of my season.”