German museum to return Korean statues this month: A curator found that the artifacts had been illegally acquired, alerted officials

German museum to return Korean statues this month: A curator found that the artifacts had been illegally acquired, alerted officials 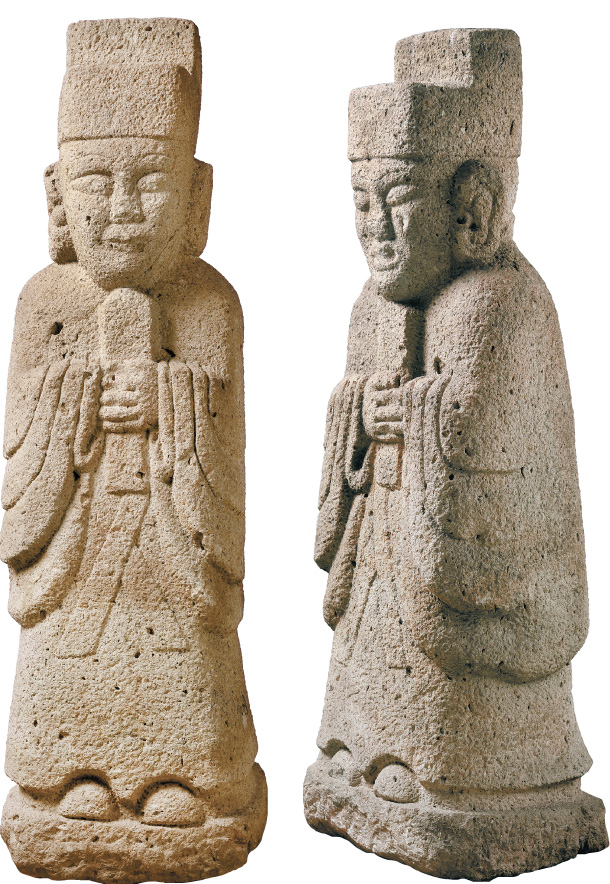 At left and right are the two Joseon Dynasty (1392-1910) grave-guarding statues that are currently being exhibited at the Rothenbaum World Cultural Museum. They will be returned to Korea after a restitution ceremony on March 19 at the German museum. [MARKK]

On March 19, the Museum am Rothenbaum Kulturen und Kunste der Welt, or the Rothenbaum World Cultural Museum (Markk), located in Hamburg, Germany, says goodbye to a pair of Joseon Dynasty (1392-1910) statues before they are brought back to Korea. The statues were made of stone in the 16th century and depict civil servants of the era. Originally guarding the grave of a high-ranking official, the statues became part of the museum’s collection in 1987 and will be transferred to the National Folk Museum of Korea in central Seoul this April.

According to the museum, curator Susanne Knodel uncovered the illegal acquisition of the statues after researching their origin during preparations for the exhibition “Uri-Korea - Ruhe in Beschleunigung,” which began its run at the museum in December 2017 as a joint exhibition with the National Folk Museum of Korea. The museum subsequently reported the matter to Korean authorities. The Overseas Korean Cultural Heritage Foundation then prepared documents to officially request the restitution early last year. According to Kim Hong-dong, secretary general of the Overseas Korean Cultural Heritage Foundation, “such voluntary decision to restitute foreign cultural properties is an exemplary case that other countries can also follow.” Kim will be visiting the museum on March 19 for the restitution event and bring the artifacts back to Korea.

The Markk said it was agreed that the statues would be exhibited until the end of the “Uri-Korea - Ruhe in Beschleunigung” in mid-March, as long as explanations of their acquisition history were added.

How exactly the two figures made their way into the art trade is not completely confirmed. However, during the economic boom of Korea in the 1970s, many buildings were established on the grounds of family graves. Some grave guards came into the country’s internal trade but were not allowed to leave the country. However, a German buyer brought the figures hidden in a moving container to Germany after buying them from an antique shop in Seoul’s Insa-dong in central Seoul in 1983. Four years later, they were purchased by Markk.

“This case shows us that the illegal export of historical cultural property was long seen as a trivial offense and a sense of wrongdoing did usually not exist,” said Barbara Plankensteiner, director of the Markk. “In this context, museums must self-critically question their former dealings with it.”

According to Plankensteiner, even in the late 20th century, the sources and export conditions of acquired works of art were often not questioned or checked. Nowadays, it is common practice to investigate the access path of a collection and to follow Unesco conventions on illegally exported cultural assets.

“We are pleased that we have been able to clarify this case and that Korea will receive the two valuable works back,” Plankensteiner added. “This is another important step that strengthens and continues the long-standing cooperation of our museum with our Korean colleagues.”

In April 2017, with the appointment of Plankensteiner as the new director of Markk, the museum began a new period of reconstruction. The museum repositioned itself and redesigned exhibitions along thematic approaches, as well as historical contexts.

Today the museum’s focus does not lie on explaining cultures, but rather on cultural roots of humans, understanding relations, similarities and differences and on the diversity of cultural and artistic accomplishments.

As of now, the museum’s Korean collection consists of 2,700 objects. They have been investigated since 2014 as part of the research project of the National Research Institute of Cultural Heritage with the help of numerous experts from various Korean museums and research institutions.

About two-thirds of the collection has been researched and published into a catalogue. The museum says that an investigation of the remaining objects will be carried out after the completion of ongoing inventory.