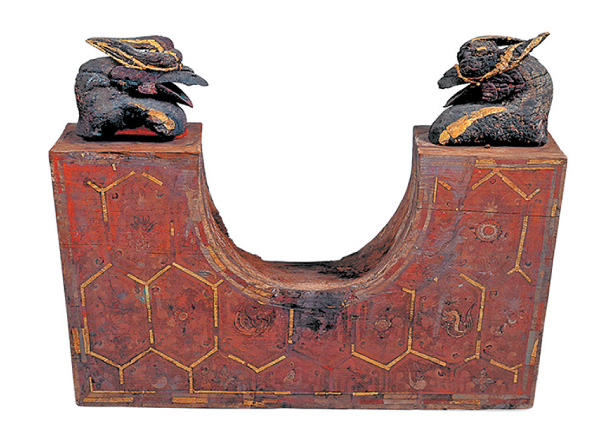 
This is a wooden pillow for a dead queen consort.

It was discovered from the Tomb of King Muryeong of Baekje.

The midsection of a big wooden block was cut in a U-shape to support the head of the corpse.

The surface of the wooden block is painted red and has golden bands around the edge.

Turtleback patterns are inside of the golden frames.

There are images of flying angels, a flying Chinese phoenix with its wings spread, a swimming dragon, lotus blossoms and vine patterns painted with white-, red-, black- and gold-colored powder inside the turtleback patterns.

On top of both sides next to the U-shaped cut, there are small holes and knobs used to fix a couple of wooden birds to the top.

The exact overall shape of the pillow couldn’t be estimated because it is badly eroded and only a part of it was discovered.

It’s one of the most well-known royal tombs because it is one of the rare tombs that were built with bricks, and also a great amount of burial goods - 2,906 pieces of remains ranging over 108 categories - were excavated from it.

They have been regarded as important sources for studying the Baekje Dynasty, particularly the culture and customs of the ancient kingdom.

Among them, jiseok, a slab of stone inscribed with the deceased’s date of birth and death, together with their achievements, reveal the exact owner of the tomb and the exact date of construction.