Samsung and LG Electronics presented their latest ceiling air conditioning technologies at the Heating, Air-Conditioning, Refrigeration and Fluid Exhibition at Kintex in Goyang, Gyeonggi. Known as Harfko for short, the biennial event took off on Tuesday and is the largest of its kind in Korea. 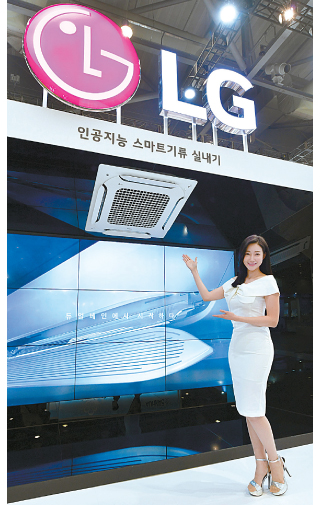 The technologies presented put an emphasis on maintaining a dust-free atmosphere inside the building and smarter functions that enhance energy efficiency.

The adoption of air purifying functions on air conditioners is not completely new. But development is picking up speed as fine dust is becoming a bigger problem than ever before.

LG Electronics set up the largest booth at the exhibition among more than 200 participants. The company showed off its five-step air purifying technology that can eliminate fine dust as small as one micrometer in diameter, as well as odor and even coliform bacteria. It can be included as an option in LG’s ceiling-mounted split air conditioner units.

LG also introduced an artificial intelligence-powered air conditioning system at the event. It works with a sensor that constantly measures the temperature of the room’s ceiling and floor to make sure the entire space is evenly cooled or heated. A sensor detecting people was upgraded so that it can recognize whether someone is in the room at a speed three times faster than the previous version. The air conditioner will automatically turn itself on and off accordingly.

The new release also comes with “dual vanes,” which means it has eight wings to spread out cool or hot air near the wind slots. Conventional ceiling-mounted air conditioners have four - one for each direction. Having two lines of vanes for each direction enables more sophisticated control of wind direction and strength.

Samsung Electronics showcased a room that shows how its ceiling air conditioning systems can control air quality through four seasons. The company newly developed an air purifying panel that can be added to Samsung’s 4-way Cassette ceiling-mounted air conditioners. This panel can also block fine dust as small as one micrometer in diameter.

It also showcased motion-detecting sensor technology that can control the wind and adjust the atmosphere according to a customer’s location and the amount of movement in a room. If the room is empty, it automatically switches to energy-saving mode.

An Internet of Things system that works with the air conditioner allows users to remotely manage air quality and monitor energy consumption.

“With environmental changes like fine dust and the commercialization of Internet of Things technology, the local market for ceiling-mounted air conditioners is meeting a turning point,” said Kevin Lee, a senior executive of Samsung’s home electronics division.