Juul expects to launch in 1st half

Juul expects to launch in 1st half 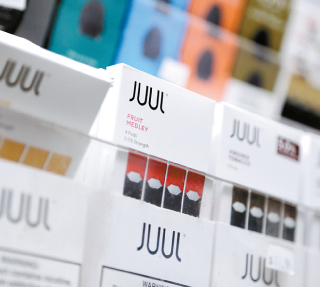 Popular e-cigarette brand Juul plans to launch its products in the first half of this year. [AP/YONHAP]

Popular electronic cigarette brand Juul will land in Korea in the first half of this year.

The Korean unit of Juul aims to launch in the first half of this year or early in the second half at the latest, said a spokesperson from Juul Labs.

Juul Labs Korea was established late last year and has filed a trademark application with the Korean Intellectual Property Office. It is reported to be currently working on securing a sales network at retailers like convenience stores.

Juul said it will abide by Korean cigarette regulations and laws, adding that it plans to lower nicotine content to just one percent in Korea.

A Juul “pod” - the cartridge of liquid that goes inside the e-cigarette - contains 3 to 5 percent nicotine in the United States. The Korean version will have a lower nicotine content in line with local laws that ban anything higher than 2 percent.

Regarding concerns about Juul’s possible evasion of regulations due to the vague definition of a cigarette in Korean law, the company said it will be subjected to all related regulations just like any other regular cigarette brand.

There have been concerns about whether Juul legally counts as a cigarette due to the unclear definition of the term. The current law states that only products that contain natural nicotine extracted from tobacco leaves - excluding stems and roots - are categorized as cigarettes.

Not falling into the definition of cigarette means that the brand is not subjected to regulations like banning sales to minors, releasing limited ads and promotions.

Last month, Kim Seung-hee of the main opposition Liberty Korea Party proposed a revised bill to ensure that liquid e-cigarettes are subjected to cigarette regulations, expanding the definition of a cigarette to include those with nicotine extracted from the tobacco plant’s stems and roots.

But Juul has since clarified that its products do count as cigarettes under current regulations.

Touching on concerns its product launch may lead to increased smoking among adolescents here, the company said it has the strictest online adult identification procedures in place and that it is considering several options to prevent teen usage in Korea.

Some of the competitors Juul will face in the domestic market are U.S. brand Phix and Japanese brand Jouz, both of which launched in the Korean market several months ago.