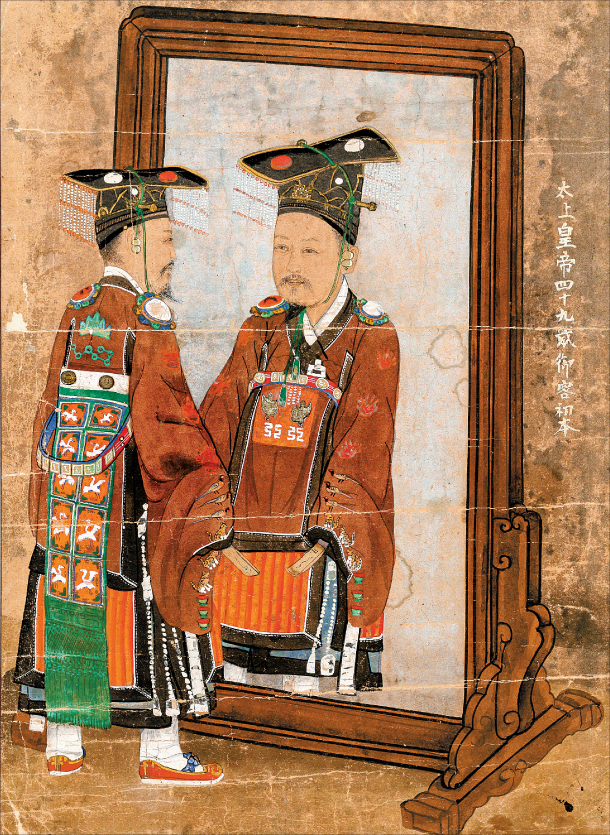 A rare portrait of Emperor Gojong (1852-1919) looking at a full-length mirror with a pleasing smile is currently on display at the Seoul Calligraphy Art Museum inside the Seoul Arts Center in southern Seoul for the “Self-Portrait” exhibition that runs until April 21. [SEOUL CALLIGRAPHY ART MUSEUM]

Emperor Gojong (1852-1919) of the Korean Empire (1897-1910) stands before a full-length mirror and looks at himself pleasingly with a soft smile. Of all the photographs and paintings of the emperor, there are none like this with Gojong showing off his personality, making this painting valuable for its rarity.

This painting is one of the highlights of the “Self-Portrait” exhibition that kicked off on March 1 at the Seoul Calligraphy Art Museum inside the Seoul Arts Center in southern Seoul to mark the centenary of the March 1 Independence Movement and the establishment of the Provisional Government of the Republic of Korea. The painting is on public view in Korea for the first time after it was purchased from France last year. Who painted the painting, when it was painted and for what purpose it was made are still unknown and many researchers are still trying to solve this mystery, according to the museum. The exhibit runs until April 21.

Is that really Emperor Gojong?

The full-length portrait painting of Emperor Gojong is quite small in size. It measures 32.5 centimeters (12.8 inches) wide and 47 centimeters long. According to experts, this kind of painting of the emperor looking at himself in the mirror has never been seen before. They unanimously say that the man in the painting is Emperor Gojong, given that he is wearing the garment of an emperor as well as his features.

In the painting, Gojong is wearing the formal sibijangbok, or the 12-symbol dress that the emperor wears during ancestral rituals. The sibijangbok should have 12 symbols including the sun, moon, star, a pheasant and more. Before he proclaimed himself an emperor in 1897, the Joseon kings wore gujangbok, or the nine-symbol dress. The crown on top of Emperor Gojong’s head in the painting also has a crown with 12 bead-laced strings. The crowns of Joseon kings had nine bead-laced strings.

“This dress allows us to sense Gojong’s strong will, who declared Korea an independent empire,” said Lee Dong-guk, senior curator of the Seoul Calligraphy Art Museum.

Gwon Haeng-ga, a Korean art history professor at Sungkyunkwan University, confirmed that “the detailed description of the garment as well as the round face of the emperor in the painting no doubt points out that the man in this mysterious artwork is Emperor Gojong.”

Art historian Mok Su-hyun also said that “only two kings of Korea wore this garment, and they were Gojong and his son Sunjong.” She added that the “gentle and round face in the painting resembles Gojong.”

Curator Park Chun-ho of the Kim Chong Yung Museum explained that the “overall features of the face in the painting are similar to Gojong’s portraits,” confirming that, although the artist is unknown, the subject is definitely Emperor Gojong.

Who is behind the painting?

Compared to other works of art, there are many paintings of Gojong that still exist today. According to Cho Sun-mi, an art professor at Sungkyunkwan University, Gojong was so interested in having portraits that he personally ordered the establishment of a temporary department to produce portraits of the king in 1902.

The National Museum of Korea and the National Palace Museum of Korea each have a portrait of Emperor Gojong wearing a golden robe known as hwangryongpo in their collections. These portraits were painted by artist Chae Yong-shin (1850-1941).

While most of the portraits of Gojong face straight ahead, this unique painting depicts Gojong standing sideways. On the right side of the painting, there is writing in Chinese characters that say, “Taesang Hwangjae,” which is a title that Gojong received after he had to hand over the emperor’s seat to his son Sunjong in 1907 by the Japanese after the Hague Secret Emissary Affair. The title is followed by his age “forty nine” and a statement that says it is a first copy for government use. This may seem like it clearly points to when this painting was created, but according to researchers, Gojong turned 49 in 1900 and was given the title of “Taesang Hwangjae” in 1907. 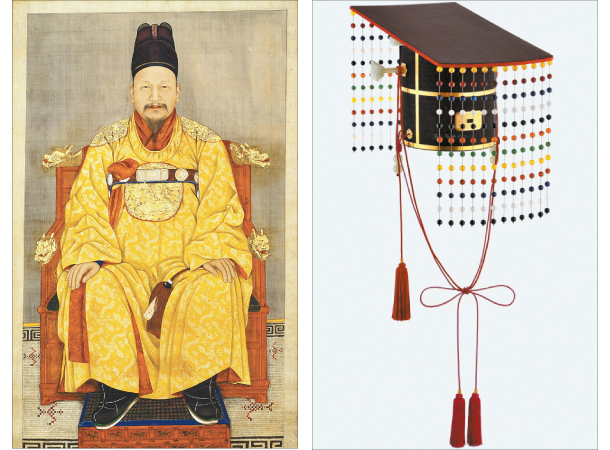 Left: A portrait of Emperor Gojong wearing the golden robe of an emperor is part of the collection at the National Museum of Korea. Right: Gojong’s crown which has 12 bead-laced strings, representing an emperor. It is also seen in the painting on the left. [SEOUL CALLIGRAPHY ART MUSEUM, JOONGANG ILBO]

“We believe the same painting was first painted in 1900 and that this is a copied version that was painted in 1900,” said Lee. “There’s a possibility that this was also painted by Chae Yong-shin because his ‘Portrait of a Beauty,’ which is on display at the Sejong University Museum, also depicts the woman looking at herself in the mirror.”

Other experts, however, think differently, insisting that no one can assert who the artist is.

“I can’t see any of Chae Yong-shin’s characteristics in the painting’s composition or brush strokes,” said Gwon. “It seems highly likely that the painting was painted not inside the royal court, but by a painter outside of the palace,” he added, explaining that there was a great desire among common people to possess portraits of Emperor Gojong after his death in 1919.

What does the painting mean?

Another significant characteristic of this painting is that the figure of Gojong in the mirror is larger than the actual Gojong standing in front of the mirror. The reflection of the emperor looks a lot bigger and dignified. The reflected face looks bright and gentle.

“Emperor Gojong was a strong pillar of the Korean Empire during a period of upheaval,” said Lee from the Seoul Calligraphy Art Museum. “The fate of the nation was hanging by a thread and this painting shows Emperor Gojong’s hope for a better tomorrow.”