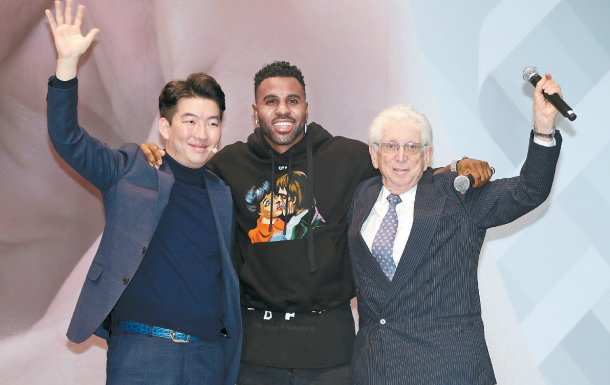 Greenberg, Jason Won, the company’s vice chairman, Hwang Yun-ha, CEO of 7SIX9 Entertainment Asia, singer Jason Derulo and his longtime manager Frank Harris sat down with the local press at KT’s 5G Experience Center to share their thoughts on their latest work, “Let’s Shut Up & Dance.” It is a pop song they put on together with K-pop artists Lay from Exo and boy band NCT 127. It will be the first song on a Michael Jackson tribute album, “The Greatest Dancer,” a four-track EP that will officially be completed on June 25, the date of Jackson’s death.

“I chose [to work with] them because I wanted to help expose the world to a young generation of music that’s about to happen everywhere,” Greenberg said. According to Hwang, Greenberg is scheduled to meet with some young Korean groups, and he will take them back to the United States to nurture and develop, and possibly manage them in the future.

“I’m here in Korea to help find the next big K-pop group,” said Greenberg. “I firmly believe that K-pop is going to be international music, and that it’s going to spread all over the world - it’s already started. I’m here to find some of your greatest talents.”

Greenberg, who served as CEO of Jackson’s label, MJJ Music, from 1993 to 2000, has dedicated his entire life to finding new talent in pop music, and was responsible for signing some of the biggest names in musical history such as ABBA, The Blues Brothers, Dr. Dre, Eazy-E and 3T. For him, choosing K-pop stars to be featured on the first song of the tribute album wasn’t coincidence, but a step into the future of pop music. He believes that K-pop may be the future of pop music, not just in one particular region, but all over the world.

“It is absolutely going to be a phenomenal, international form of music. It’s done by some of the greatest artists, and I foresee that just like The Beatles hit in the past, K-pop is about to hit.”

Asked whether he had any more groups in mind that he would like to work with in the future, Greenberg answered, “We have quite a list, but nothing we can announce yet. But my favorite right now is Blackpink.”

Derulo agreed, saying, “I like Blackpink, too,” adding that this collaboration with Lay and NCT 127 allowed him an experience he wouldn’t soon forget. “What was special about this project was that we all came together for a common idea. We all started on Michael, who was the sole reason why I started to sing and dance in the first place. To see a group of young guys that are on the complete other side of the planet is so special,” he said.

Monday’s press conference was not only a celebration of the collaboration between pop music and K-pop, but an opportunity to see how music will bring everyone together in the future, said Won. “Our hope is that some day, it’s not just K-pop, but just pop. Music is just music, dance is just dance, [and] we don’t have to label it with a nationality.”

Greenberg and Derulo also checked out KT’s latest 5G technology, such as virtual reality (VR) and hologram technology, which were on display at the exhibition center. The two also stood in front of the local press on March 5 - not in person but in hologram images from the other side of the globe.

“The inevitable convergence between art and technology is going to come very soon in the future […] It is exciting to see what kind of future we will see with that technology,” said Won.