For Chun In-gee, it really is all about taking part

For Chun In-gee, it really is all about taking part 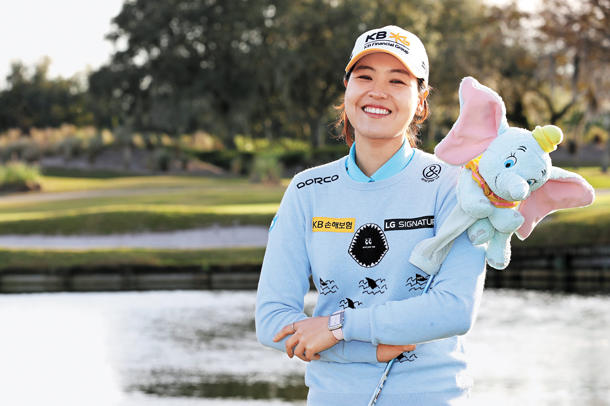 Chun In-gee poses for a photo at the Grand Cypress Golf Resort in Orlando, Florida, on Jan. 25. [ILGAN SPORTS]

Although Chun In-gee is only 24 years old, when it comes to the LPGA Tour she’s basically a veteran.

So far this season, her fourth on the Tour and her seventh as a professional, Chun has competed in three tournaments and her best finish was tied for 12th at the Diamond Resorts Tournament of Champions presented by Insurance Office of America, the season opener. Then, Chun finished tied for 42nd at the Honda LPGA Thailand and tied for 15th at the HSBC Women’s World Championship.

“I had high expectations because I was doing well during training,” Chun said. “But since I wasn’t playing as well as I had expected, I was a little disappointed. I had a lot of thoughts. I’ve been waiting for the tournament and thinking and working on the areas that I need to improve on.”

Before Chun joined the LPGA Tour, she was one of many Korean golfers to have already seen success on the KLPGA Tour. From 2013 to 2015 season, Chun won 10 KLPGA Tour events as well as two JLPGA Tour events in 2015.

Chun joined the LPGA Tour in 2016 with huge potential - she won the 2015 U.S. Women’s Open in her first appearance as a non-LPGA member. With that win, Chun became the first player in history to win majors on three different tours in the same calendar year.

During her rookie season, she won another major, the 2016 Evian Championship, with a score of 263, the lowest-ever winning score in a major tournament for either men or women, and was named Rookie of the Year.

In addition to the top rookie award, Chun also won the Tour’s Vare Trophy, an honor given to the golfer on the LPGA Tour with the lowest scoring average for the season.

Following her successful LPGA Tour debut, Chun got in a long slump, spending the next two years without a win. Chun finally lifted a trophy again in Korea in October last year when she stormed through the final round to win the LPGA KEB Hana Bank Championship in Incheon.

Her impressive rookie season allowed Chun to compete for Korea at the 2016 Rio Olympics, but the two year drought caused her world ranking to drop significantly, reaching No. 21 in the latest Women’s World ranking.

“When I wasn’t winning, it was a difficult time for me and the people around me because I was being pessimistic,” Chun said. “It was a lot more meaningful because I won it in Korea. But unlike the other times I won, after the win I felt a little empty. So I worked harder during my offseason training.”

It was a long awaited victory for Chun. During the 2017 season, she had five runner-up finishes, but her 2018 season was a little more disappointing as she only had two top-10 finishes before her victory in Incheon.

This season, Chun is determined to focus more on the process than the result.

“As this is my seventh season on the tour, I think I am more mature about golf,” Chun said. “Golf can never be a perfect sport. I need to play my best and wait for the result. Also, the process of making all this happen is important. That is how I want to spend this season.”

Chun has spent enough time as a professional to be considered a veteran golfer. Rather than getting comfortable playing the same tournaments, she is still seeking new challenges.

“There are good things about getting used to [playing on the Tour], but once I get too used to it, I don’t think I’ll be able to find the [same] joy,” Chun said. “This season, I want to get rid of all those thoughts and build up this season from nothing.”

Rather than adding more wins to her already impressive resume, this season and in the remaining seasons in her professional career, Chun said she hopes to be happy and enjoy the sport.

“Of course, every golfer wants to play well in major tournaments,” Chun said. “But rather than a win, I want to feel happy looking back at the process of my hard work. It’s important to be a good golfer, but I want to become a person who can inspire others.”

Starting tomorrow, Chun will resume her season at the Bank of Hope Founders Cup in Phoenix, Arizona. This is the first LPGA Tour event to be hosted in the United States this season.