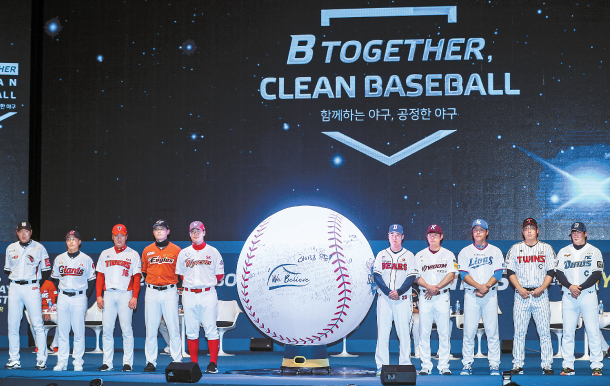 Players from the 10 KBO clubs pose for a photo next to a giant baseball that has the hopes and wishes of fans written on it during the 2019 KBO media day event at the Coex Auditorium in southern Seoul on Thursday. [YONHAP]

The long, cold winter has ended and spring has finally arrived, bringing with it the long-awaited start of the 2019 KBO season.

Kicking off tomorrow, this year’s season has the earliest start ever. The season is shifted slightly forward in order to leave plenty of time for the Premier 12 in November, which will act as a qualifying tournament for the 2020 Tokyo Olympics. The regular season is scheduled to end on Sept. 13, followed by rescheduled games and then the playoffs.

Ahead of the opening games, the managers and some players from the 10 clubs gathered at the Coex Auditorium in southern Seoul for a media day on Thursday.

Just a day before, the 10 teams were busy on the field wrapping up their exhibition game fixtures. The SK Wyverns proved just as dominant as last year during the exhibition games, with five wins, two losses and a draw.

“Since [former] manager Trey Hillman has given us such a great gift, I am a little overwhelmed,” said manager Yeom Kyung-yup. “It is important to win, but we’ll try to show the fans that we are trying our hardest in every game.”

A new manager inevitably means some changes, but Wyverns’ captain Lee Jae-won isn’t worried about the atmosphere in the team.

“We worked really hard over the winter,” said Lee. “Now we just have to show the fans. We’ll play a game where we don’t lose.”

Regular season champions the Doosan Bears didn’t see much success in the exhibition games, but are still one of the favorites to win the title this season. The Bears have advanced to the Korean Series four times in four years, winning two.

In the past two seasons, the Bears have finished just shy of winning the Korean Series.

“For the fifth-straight year, our goal is to win,” said manager Kim Tae-hyung. “We’ll play Doosan baseball and we’ll try our best.”

“Last year, the key word for our team was challenge,” said Eagles manager Han Yong-duk. “This season, we’ll have a new challenge and prove that our third-place finish wasn’t just a coincidence.”

Judging by their performance last year, the Kiwoom Heroes are expected to be a real threat this season.

The Heroes have a comparatively young team and a shorter club history, but they proved that they have what it takes last year, advancing all the way to the second round of the playoffs.

“We had some regrets after the season last year,” said captain Kim Sang-su. “We’ll play well so this season doesn’t end up as another disappointment.”

The Kia Tigers, the 2017 Korean Series and regular season champions, once again return as fan favorites. After a difficult 2018, they are ready to repay their fans’ support this season.

“Along with captain Kim Joo-chan and An Chi-hong, our team will work together and be the ones to play until the very end,” said manager Kim Ki-tai.

The Samsung Lions, Lotte Giants, LG Twins, KT Wiz and NC Dinos all missed out on a spot in the postseason last year. Four of the five teams promised fans they would make a comeback this year, while the Wiz vowed to reach the playoffs for the first time in the club’s short history. This will be KT’s fifth season in the KBO — last year was the first time they finished above last place.

All 10 teams will begin their seasons at 2 p.m. tomorrow, competing in a two-game series over the weekend.

The clubs announced their starters for Saturday’s opening games.

At Jamsil Stadium in southern Seoul, the Bears will start Josh Lindblom while the Eagles will have Warwick Saupold on the mound.

At Munhak Stadium in Incheon, Kim Kwang-hyun will start for the Wyverns against William Cuevas for the Wiz.

At the Kia Champions Field in Gwangju, the Tigers will start Yang Hyeon-jong and the Twins will start Tyler Wilson.

At the new Dinos stadium in Changwon, the home team will start Eddie Butler against Deck McGuire for the Lions.

At Sajik Stadium in Busan, the Giants will start Brooks Raley while the Heroes will start Jake Brigham.