Teamwork takes Ulsan all the way to the top

Teamwork takes Ulsan all the way to the top 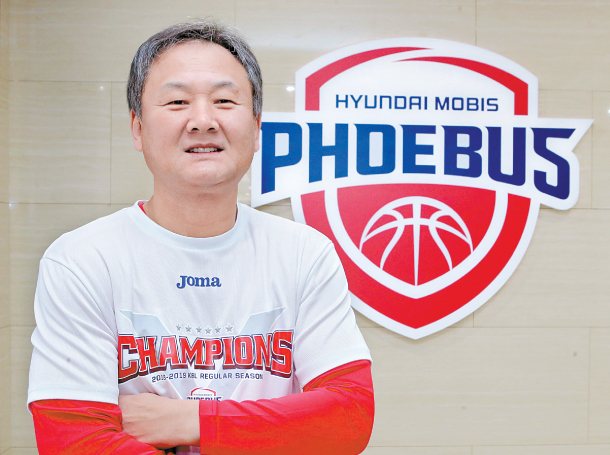 The Ulsan Hyundai Mobis Phoebus held the lead for the entire season, securing its spot as the regular season champion on March 7, with four games still to play. This was the Phoebus’ seventh regular season victory, the most among the 10 KBL teams.

Despite the impressive record, the day the Phoebus was declared the regular season champion was surprisingly subdued.

“On the day we secured the regular season win, we skipped celebrating,” said Phoebus head coach Yoo Jae-hak. “There probably isn’t a team like us, where the head coach, players and fans are this calm [about winning].”

The Phoebus was dominant this season, averaging 87.8 points per game and passing the 100-point threshold in seven games this season. When it comes to errors, the team had the lowest number, at 78.

This season, the Phoebus’ starting members were so strong that the fans called them the “Movengers.”

By looking at the results and statistics, the Phoebus’ season looks perfect, but it wasn’t all smooth sailing. In the middle of the season, the team struggled when some key starters were injured.

Yang Dong-geun had to miss three weeks and Lee Dae-sung was out for four due to injuries. In December, Lee Jong-hyun injured his knee, taking him out for the rest of the season.

Along with the injured players, Ra Gun-ah regularly missed games as he was called up to the national team. Despite the issues, the Phoebus didn’t really struggle — the team’s longest losing streak was just two games.

As manager, this season’s victory is Yoo’s sixth. Behind the success of Yoo’s career as a manager, he pointed out his crisis management skills. Yoo emphasizes the importance of system basketball, a method that means the team doesn’t rely on a specific player.

“Park Kyoung-sang, Oh Young-jun and Moon Tae-jong filled the absence and under the goal net, Ra Gun-ah and Ham Ji-hoon stayed strong,” Yoo said. “As long as we have a structured system, we should be fine with the absence of the players.”

Yoo even insisted on teaching the team’s strategy to the second-division team.

“On our team, even the second division players have to memorize our defense and offense patterns,” Yoo said. “Our rookie Seo Myung-jin said he’s getting such a bad headache.”

By building such strong teamwork, the Phoebus stayed dominant, but, perhaps unsurprisingly, missed out on the MVP award. This season it was Lee Jung-hyun of the Jeonju KCC Egis who won the MVP Award among the Korean players.

Among the foreign players, Ra, who is not actually foreign as a naturalized Korean citizen, won the MVP Award. Yoo also didn’t go home empty-handed, winning the Coach of the Year Award for the fifth time.

Yoo’s managerial success followed a playing career that was tragically cut short. At 28, Yoo was forced into retirement following complications related to knee surgery. Although he had a shorter career than most, he still managed to earn a spot on the Korean men’s national team and competed at the 1988 Summer Olympics.

During his career as a player, Yoo had a reputation for hard work. This instinct persists today and has carried over to his players.

“In terms of training time, I can’t see myself or the others getting lazy,” Yoo said. “Even Ham Ji-hoon, who literally gains about 2 kilograms [4 pounds] if he skips a day of workouts, said he probably would have retired a long time ago if he didn’t play on this team.”

Throughout Yoo’s managerial career, he has continuously adapted to the latest trends and plays. When he was first appointed head coach in 2004, Yoo focused on strong defense. However, this season, Yoo changed the strategy to focus on early offense.

“Two years ago, when we had our offseason training in the United States, we invited an American coach,” Yoo said. “That’s when I learned that when we have speedy players like Lee Dae-sung and Ra Gun-ah, I don’t have to play a five-on-five set offense. In the mid-season, I emphasized the defense due to the long list of injuries, but once they returned, we sped up again.”

By dominating the regular season, the Phoebus receives extra benefits in the playoff — they automatically advance to the semifinals.

In the semis, the Phoebus will play in a best-of-five format against either the Jeonju KCC Egis or the Goyang Orion Orions. The playoffs will begin on Sunday.

“[Our current members have] stronger teamwork compared to the members that won four years ago,” Yoo said. “Since we took three years off [from winning the championship], I can’t wait. We won’t lose focus until the end.”