Shareholders back Hyundai Motor over Elliott on all counts

Shareholders back Hyundai Motor over Elliott on all counts 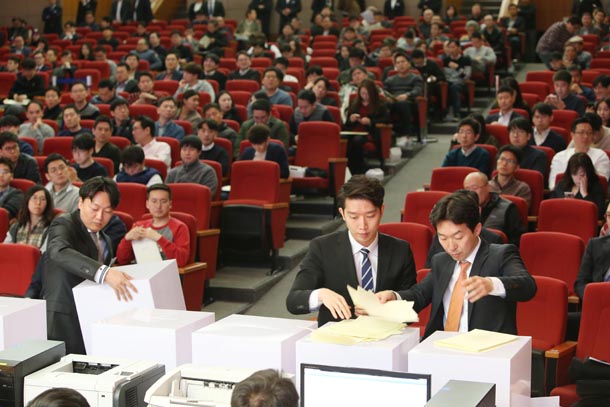 Hyundai Motor Group claimed a complete victory over U.S. activist fund Elliott Management at its annual general meeting Friday, putting an end to a lengthy quarrel over the issues of dividend payouts and outside directors.

Elliott had demanded a one-time payout of 4.5 trillion won ($3.9 billion), or 21,967 won per share, this year from Hyundai Motor. The automaker’s board proposed 1.1 trillion won, or 3,000 won per share, instead. Eighty-six percent of the shareholders voted in favor of the company, while just 13.6 percent of votes backed Elliott’s proposal.

As major proxy advisers, including the Institutional Shareholder Services (ISS), Glass Lewis and Korea’s institutional investor the National Pension Service (NPS), had earlier backed Hyundai on the dividend issue, the win was predictable.

The advisers had echoed the automaker’s position that it will need a substantial amount of cash for research and development and potential mergers and acquisitions to improve long-term profitability, meaning it will be better to make investments rather than large dividend payouts at the current time.

The vote on outside directors was a lot harder to predict, as proxy advisers were split on whether to bank the candidates proposed by Hyundai Motor or by Elliott.

The shareholders at the meeting were able to vote for or against each of the six proposed candidates. The three with the most votes were appointed as directors.

All three of Hyundai’s candidates were successfully appointed to the board.

Yoon won the most votes with 90.6 percent of shareholders welcoming the investment banker on board. Yoon was the only candidate who earned the approval of all the major proxy advisers and the NPS.

According to recent filings, at least 27 percent of Hyundai Motor shares are controlled by Hyundai Motor Group and its owner family.
Voting went in a similar direction at Hyundai Mobis’s shareholders’ meeting, also held on Friday.

All outside director candidates recommended by Mobis also won over the candidates selected by Elliott.

Hyundai’s big win against Elliott is a turnaround from last year, when Hyundai Motor Group had to nix its restructuring plan due to strong opposition from the U.S. hedge fund.

The auto group attempted to make its auto parts affiliate its de facto holding company by merging part of Hyundai Mobis with the group’s logistics arm Hyundai Glovis. The plan fell through as Elliott said the merger ratio between Mobis and Glovis was unfair.