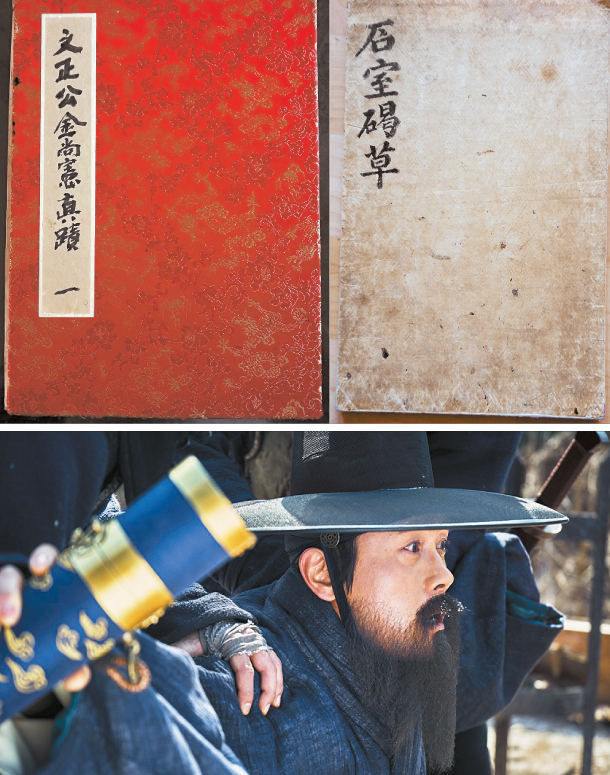 Top: Handwritten documents by Kim Sang-hun, who was a foreign minister at the time, are now part of Daejeon’s designated Cultural Heritage. Above: A scene from the film “The Fortress” (2017) featuring Choi Myeong-gil, the interior minister at the time, played by actor Lee Byung-hun. [YONHAP, CJ ENTERTAINMENT]

In film and television, historical dramas have never gone out of style. Fans of period dramas, both in Korea and abroad, like to be transported to a different time and learn about the stories that swept up - or were put in motion by - our ancestors. Some watch to see how the present compares with the past. Others watch to see progress. Foreign Korea-philes can get a crash course in Korean history while watching historical films. But all historical dramas create characters, add romantic plots and conflate or invent events to make sure viewers don’t lose interest. With Fiction vs. History, the Korea JoongAng Daily attempts to distinguish fact from fiction in popular period dramas and films for clarification and to dispel misunderstandings.

One of Korea’s most beautiful walking trails, visited by both Koreans and foreign travelers alike, is the Namhan Mountain Fortress, also known as Namhansanseong. The site is even inscribed on the Unesco’s World Heritage List.

This fortress, located on the southern outskirts of Seoul, stretches 12 kilometers (7.4 miles) in length, and aligns with the ridges of the mountain to protect the area to be used as an emergency capital during the Joseon Dynasty (1392-1910). It indeed served as an emergency capital for 47 days as King Injo and his officials escaped to the Namhan Mountain Fortress when China’s Qing Dynasty invaded Korea on the freezing cold winter day of Dec. 14, 1636.

Some historians even insist that the Qing invasion of Korea is one of the most humiliating chapters of Korean history, even more mortifying than the Japanese invasion. The story of this shameful invasion was turned into a film in 2017 titled “The Fortress” directed by Hwang Dong-hyuk.

Thanks to its great storytelling and star-studded cast, which includes Lee Byung-hun, Kim Yoon-seok and Park Hae-il, this historical flick has been sold to 28 countries around the world, including the United States, Japan and Singapore, according to the film’s local distributor, CJ Entertainment.

Since the film is being watched by audiences abroad, let’s get the facts straight.

The film starts off with a narration explaining a brief background of how Later Jin Dynasty leader Hong Taiji newly declared the nation as Qing and himself as emperor, insisting that Joseon be part of the nation.

When Joseon refused, the Qing Dynasty was infuriated and invaded Joseon in just five days. King Injo and his officials initially planned to evacuate to Ganghwa Island in Incheon, but, because the route to the island had been cut off, they instead take refuge at the Namhan Mountain Fortress.

Because the director does not explain in detail what strategies the Qing forces used to be in such an advantageous situation in the first place, only Koreans who are well aware of this part of history will be able to fully grasp the situation. What the film does not explain in detail is that the Qing forces advanced into Seoul in just five days while the river was frozen. No one could foresee such a strategy. Moreover, prior to the invasion, Emperor Hong Taiji even ordered his people to secure the coastlines of Korea so that Ming could not send reinforcements, making Korea helpless and forcing its king to have no choice but to be isolated in the Namhan Mountain Fortress.

The film then goes on, showing how King Injo had to make important decisions while being at the crossroads of a conflict between the Qing and the Ming Empires, as well as between his officials who were intensely arguing over what to do.

In the film, Choi Myeong-gil, the interior minister at the time, played by actor Lee Byung-hun, is featured as man who insists on siding with the Pro-Qing Empire faction, while Kim Sang-hun (played by Kim Yoon-suk), who had the title of a foreign minister, didn’t think of any other option than to fight. The film shows King Injo having a hard time making decisions between two stubborn officials.

But according to historical records, Choi did not insist on siding with the Qing from the beginning. In a document written by Choi to the king on Sept. 5, 1656, it states that either Joseon “should come up with a strategy to avoid this fight or fight aggressively.”

He added that if the king decides to go into war, “we should lead to an advantageous outcome near Amnok River to avoid bigger damages by blocking the Qing forces from coming down to the inlands.”

Later in the film, King Injo admits defeat and comes out from the Namhan Mountain Fortress. As stated in the document sent by the Qing, he takes off the robe of a king and changes into a blue garment that represents a retainer. He then walks out of the fortress and bows his head down to the ground before Emperor Hong Taiji while the people of Korea shed tears behind him.

This is a historical fact portrayed in the film. However, historians insist that one of the major reasons why the king decided to admit defeat has not been included. Eventually, he would’ve hauled down the flag, but according to historians, King Injo made that decision right after he heard that Crown Prince Sohyeon (first son of Injo) and Grand Prince Bongrim (second son of Injo), who were taking refuge in Ganghwa Island, were being held hostage.

Another major difference between film and fact is in the final part of the movie where Kim, the foreign minister, kills himself. In the film, he succeeds in killing himself, but in reality, he couldn’t because officials found him and stopped him from strangling himself. Meanwhile, Kim, the interior minister, was imprisoned in Shenyang, China, in 1640. Choi was also imprisoned in Shenyang, where he met Kim. Historical records say that the two officials exchanged poems in the prison.