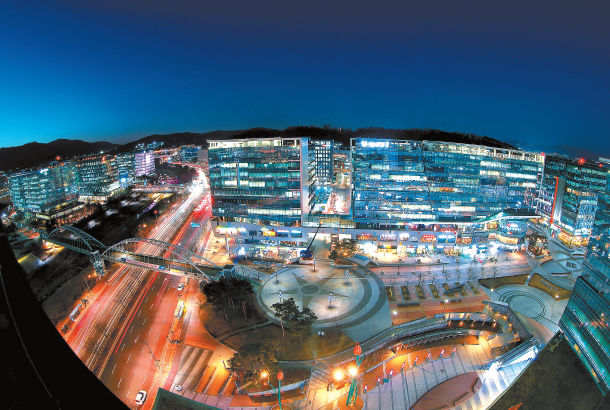 A view of Pangyo Techno Valley in Gyeonggi. More than 70,000 tech employees and developers come to work in this region. [JOONGANG ILBO]

A local restaurant in Pangyo Techno Valley, Gyeonggi, is packed with workers having lunch at noon. People wait in line outside the shop, its popularity with local workers ensured by the affordable food - priced between 7,000 ($6.18) and 8,000 won - available inside. Restaurants selling more expensive food appear to be less popular.

“You have to pay between 10,000 won and 13,000 won at least to have lunch in this area,” said a local designer who has worked at a Pangyo-based game company for three years. “I could spend around 6,000 won to 7,000 won to dine out near my home in Jamsil [southern Seoul], but with that money you can only afford small snacks around here.”

Some people complain that living in Pangyo, where some 70,000 tech employees and developers come to work, is almost as expensive as living in Silicon Valley in the United States.

The U.S. tech hub has been suffering from high price levels and a housing shortage, just as Pangyo does now. According to the Silicon Valley Competitiveness and Innovation Project’s 2019 report, the U.S. region’s ability to sustain growth and quality of life is eroding due to congestion and increasing prices. Many companies have relocated to more affordable regions like Los Angeles to escape the high costs.

“Even more people are moving out of our still prosperous but increasingly congested and expensive region,” the report said. “On critical quality of life indicators - median home prices and commute times - Silicon Valley continued to lose ground to other innovation regions.”

The high rent has brought up food prices, which has deterred many workers in the region from spending money outside their office buildings.

Left: A restaurant in Pangyo is packed with people having lunch. Restaurants that offer affordable food are especially popular with local workers as high food prices have deterred many from spending money outside their office buildings. Right: A Korean restaurant in Pangyo raised its lunch menu price by 1,000 won (＄0.88) in January. The notice says that the restaurant could not continue its business by selling food at its original price. [JOONGANG ILBO]

“Half of the new businesses in Pangyo move out before even spending a full year in the region, a local Japanese restaurant employee said in an interview, adding that the restaurant pays 6 million won in rent every month. “Considering the insanely expensive rent, we can’t even say our food prices are expensive.”

Unlike NCSoft and Nexon employees who can dine affordably at their companies’ in-house dining halls, many tech workers have no choice but to pay for expensive food out of their own pockets. Some have been forced to accept that high prices are the new normal.

“It is normal to spend more than 10,000 won for lunch in Pangyo. I even spent 14,000 won for yakisoba once,” a developer in Pangyo said. “There were times I was aghast at the high food prices, but since I don’t have any better option, I decided to think positively. I can have more delicious meals by paying more.”

Now many companies in the region have rolled up their sleeves and decided to support their employees’ meal costs.

Aware that many young professionals are sensitive about spending lots on food, Pangyo-based companies are giving money and food to their employees while partnering with local businesses.

The company also provides simple snacks like instant noodles and gimbap (seaweed rice rolls) for free in the evening. Employees at Kakao Page are given 150,000 won per month through a smartphone application. Those who work overtime are given extra cash to spend on food.

NS Home Shopping deposits 198,000 won monthly to its employees’ security badges, which can also be used as a transaction method. The money can be used at the company’s in-house dining hall and 12 restaurants it owns in the area.

Some companies located in Pangyo have partnered with local restaurants. Game developer Webzen partners with four restaurants near its office and provides a 7,000 won discount to its employees.

NHN Entertainment distributes meal tickets to its workers through its own application, Payco. Its employees can spend up to 6,500 won per day by spending a ticket. They pay the difference on their own.

“In Silicon Valley, which has more than 500,000 high tech workers, high prices are a huge threat to the region’s growth,” said Jung Kwang-ho, a public administration professor at Seoul National University and executive president of the Society of Open Innovation: Technology, Market & Complexity.

“At this point, we need to think of solutions to reduce the number of developers [in Pangyo] who say they are poor because of the high cost of housing and living, despite making more than 200 million won a year.”