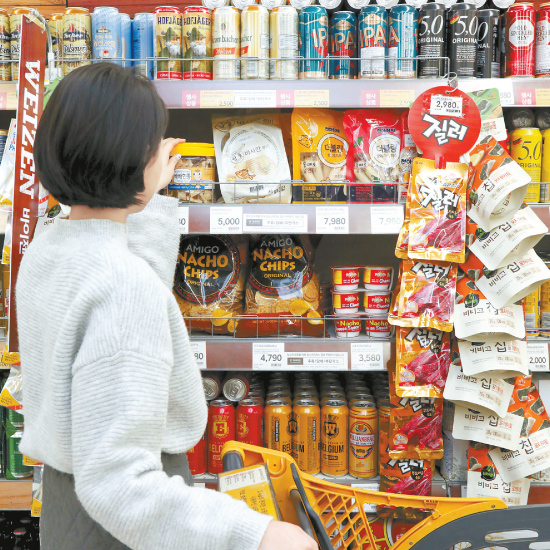 A customer at Emart’s Seongsu branch in eastern Seoul selects snacks in the beer aisle. [EMART]

With the rising popularity of drinking at home, retailers are starting to treat finger food with more respect.

Recently, it embarked on a new strategy to display alcohol and snacks side by side to create some synergy.

For more than a decade, Emart strictly segregated alcohol beverages and snacks. But starting from last week, the 26-year-old discount chain has been experimenting on a new display format that breaks down that barrier.

Around 5 percent of the foreign beer aisle was filled with nacho chips, dipping sauce and sausages, which Emart explained were chosen to cater to the 20s and 30s age group that likes foreign beers. In the soju and sake corner, the company displayed strips of packaged fish jerky or cheese. Likewise, the liquor corner had beef jerky displayed.

During three days of the test, the 13 stores saw dried pollack sales rocket 249 percent compared to the same period last year. The number of customers who purchased both alcohol and dried pollack rose 198 percent year on year.

The company saw similar results when they placed cockles in the wine aisle. Vice versa, displaying alcohol in seafood aisles also pulled up sales for both, Emart said.

“Behind the arrangement change was our judgment that drinking at home is not a temporary trend but a larger shift that touches the entire retail industry,” the company said. Emart plans to expand such displays to other branches in the future.

To win over customers, the three chains have embarked on a fierce competition to develop drinking snacks suitable for microwave ovens.

“The reason refrigerated anju dishes are on the rise is because drinking at home is no longer about filling a craving for alcohol but more about satisfying one’s tastes,” CU said. “This is why customers look for diverse anju and alcohol that can meet their personal preferences.”