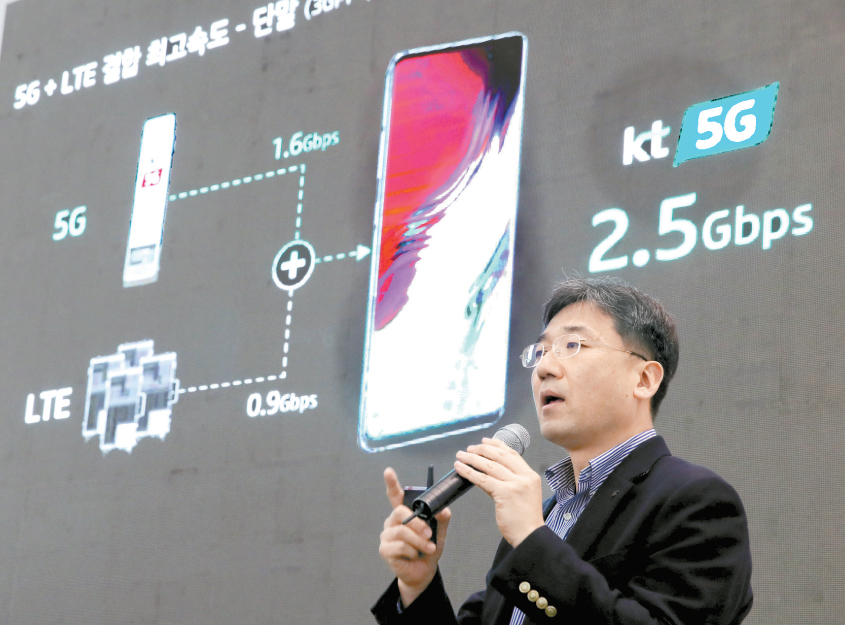 KT said it will set up 30,000 5G base stations before commercializing its 5G network for mobile phones to offer the largest network coverage in the country, during a press briefing Tuesday in Gwanghwamun, central Seoul.

The announcement comes as Korean carriers are expected to launch their first 5G phone plans on April 5 in line with the release of Samsung’s Galaxy S10 5G on the same day. KT plans to announce its 5G phone plan prices next week.

While KT is still building up its network infrastructure for the high-speed next-generation network, the company said 80 percent of the Korean population will have access to its 5G network if they have 5G-enabled smartphones by the end of this year.

As of Tuesday, KT said it has established its 5G infrastructure in the Seoul area as well as places where people tend to gather in large numbers, including 70 hypermarkets and department stores across the country. It is also building up infrastructure to offer 5G services on key transportation routes like KTX, expressways and airports.

“To improve the 5G ecosystem, we have also established our 5G network at 464 university campuses and nearby areas as well as industrial sites like the Hyundai Heavy Industries shipyard in Ulsan and the autonomous driving testing ground K-City in Hwaseong, Gyeonggi,” KT said in a statement.

Based on the established infrastructure, the second-largest mobile carrier in the country said it succeeded in demonstrating 1 gigabit per second speeds over the air on its 5G commercial network using 3.5 gigahertz frequency in Seoul with the Galaxy S10 5G.

When asked why 5G speeds have not reached 20 gigabits per second yet, Kim Byung-suk, a vice president of KT’s network strategy department, said 5G will continue to get faster as technologies and equipment develop.

“When LTE was first commercialized in 2011, its speed was around 75 megabits per second, though our goal was to offer a maximum of 1 gigabit per second,” Kim said. “As we improved the network over the years, we were able to reach the maximum speed of LTE just last year.”

KT, however, said it will not aggregate 5G, 4G LTE and other networks to enhance the 5G speed - something that SK Telecom announced it would do on Monday. While the aggregation may increase maximum speeds, the strategy compromises on the 5G network’s low latency, according to Seo Chang-seok, executive vice president of the network strategy unit at KT.

“Low latency is as important as speed when it comes to 5G’s functionality … but aggregation makes the 5G network follow 4G’s latency level,” Seo said, adding that based on KT’s research 4G and 5G networks don’t show a big difference in web page loading speeds when their latency levels are intentionally adjusted to the same level.