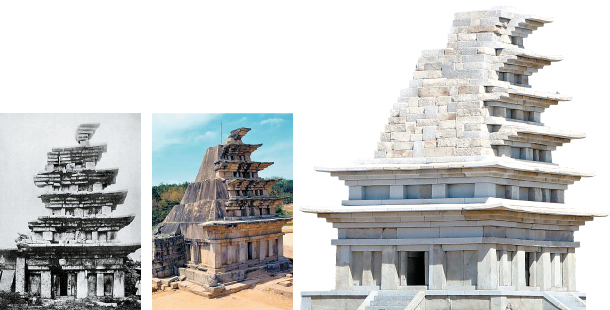 At left is a 1910 photograph that shows the pagoda when it was partially collapsed. The center shows the pagoda before its restoration with concrete on its side. At right is the restored pagoda, which was revealed to the public last week. The restoration takes the structure back to just before 1915, before concrete was used to cover up a partial collapse. [CULTURAL HERITAGE ADMINISTRATION]

The fence that had been covering Korea’s oldest and East Asia’s largest stone pagoda located inside the Mireuk Temple in Iksan, North Jeolla, was finally pulled down on Saturday, after the site went through the country’s longest restoration period - 18 years - for a single cultural artifact.

There are many stone pagodas scattered across the Korean Peninsula, but this one, regarded as the father of all pagodas in Korea, has a special place in Korean hearts because of its magnificence, its heart-wrenching history and its significance.

Built in 639, under the orders of the Baekje Kingdom’s (18 B.C.-A.D. 660) King Mu, this six-story stone pagoda (it is presumed that it was originally nine stories high) represented the pinnacle of Baekje architecture. It is the country’s National Treasure No. 11, and the entire Mireuk Temple site is included on the Unesco’s World Heritage List along with seven other Baekje sites. Due to its significance, the restoration process has been disputed from the start. The restoration of the 1,300-year-old pagoda that had partly collapsed, been plastered with concrete during Japanese colonial rule and deteriorated over centuries, was finally completed and unveiled last weekend - but it faces yet another controversy.

The Board of Audit and Inspection of Korea released the results of an inspection on March 21 that stated there were several issues regarding the completed stone pagoda. 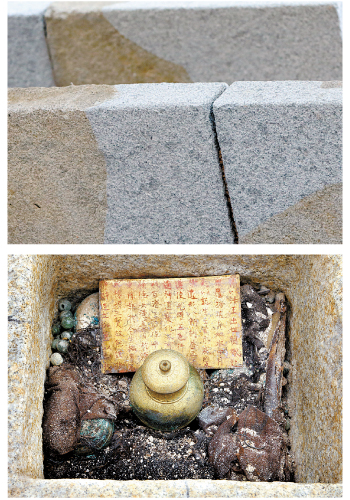 Top: The Cultural Heritage Administration used old and new stones to erect the stone pagoda. Above: During the dismantling process, thousands of relics were uncovered, including a gold plate engraved with Chinese characters that recounts the temple’s construction and an ornately decorated golden jar containing Buddhist relics. [NEWS1]

One of the major comments was that the composition of what made up the center pillars of the stone pagoda differs between the first and second stories and the ones above the third level, insisting that the National Institute of the Cultural Heritage (an affiliate of the Cultural Heritage Administration, which was responsible for the restoration) failed to follow the authorized original plan of restoration that it mapped out when it was decided to dismantle the pagoda and restore it in 1999.

During the dismantling process of the stone pagoda, which took place from 2002 to 2010, experts found out that the stone pagoda was constructed using stones of different shapes and sizes for the center pillars, while the gaps were filled in with soil. The experts believed one of the main reasons the pagoda collapsed in the first place was because the soil was washed away over years and years of rain.

Therefore, after consulting with experts, the Cultural Heritage Administration decided to use new rectangular stones to construct most of the center pillars for safety reasons. However, halfway through building, the Cultural Heritage Administration decided to make changes and mixed original stones with the new ones to erect the next four levels of center pillars.

The board pointed out that the administration carried out the change without carrying out a safety check, and even failed to draw new design specifications before erecting the pillars.

In response, the Cultural Heritage Administration said, “It is true that the composition of the base and the upper part of the center pillars of the pagoda are different,” however, the change was made after discussions with experts and committee members from Cultural Properties who believed that “it would be better to make full use of the original stones as best as we could for historical value.”

According to Kim Hyun-yong, a researcher at the National Research Institute of Cultural Heritage who led the archaeological team that restored the pagoda, around 81 percent of all materials used in the restored pagoda are original stones.

The board also pointed out that the administration changed the fillers halfway through construction. In the beginning, the administration initially used a material known as silica fume mixture as fillers, but changed to a red clay mixture mid-restoration.

“Although silica fume mixture may be the strongest, there were some concerns that the material was too similar to cement,” explained Kim. “That is why we decided to use red clay mixture as it is a lot more secure than soil or limestone, while the composition and the color are a lot similar to the soil that the final outcome will give a more original look rather than looking brand new.”

Experts also say the Cultural Heritage Administration should be congratulated instead of criticized for making the changes.

Do Jae-kee, a senior reporter covering cultural heritage, wrote in his column at the Kyunghyang Daily that “it’s better late than never,” adding that it’s a relief that the Cultural Heritage Administration decided to make use of the original stones from the Baekje period.

“We all know what happened to the stone pagoda on the east side of the temple that was reproduced in 1992,” wrote Do. “Back then the administration used 95 percent new materials and erected the pagoda in two years, and it looked so unnatural and artificial that people said they wanted to ‘blow it up.’”

“We did not want to make the same mistake,” said Kim. “The people of Iksan said that the design should be recovered to make it look brand new, however, we intended to take the pagoda back to just before 915, when it suffered a partial collapse.”

That is because, according to Kim, there are no historical records that specify the exact detailed design of the pagoda. They did not want to restore the pagoda using guesswork.

“If we did so, it would’ve generated further controversy about historical accuracy and Unesco could also take back the World Heritage Site designation if we had pushed ahead with reconstruction that lacked authenticity.”

The Cultural Heritage Administration however, said it will carry out further safety checks on the pagoda to see if the changed materials affect the safety of the stone pagoda.