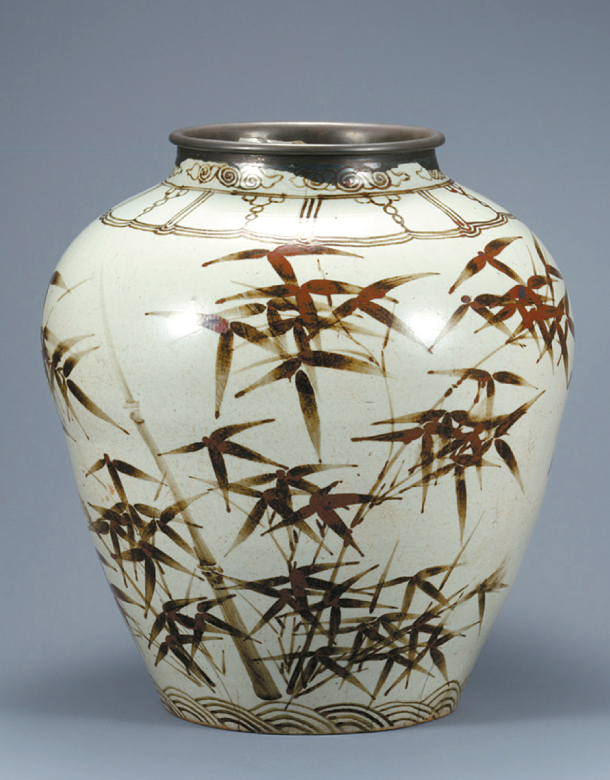 
This white porcelain jar from the Joseon Dynasty has a round body with an everted mouth rim.

The body fully widens from the slant of the neck and then steadily narrows at the bottom.

The cloud and flower patterns on the neck and shoulder parts of the jar were painted with black pigment that has shading, and so were the continuous wave patterns on the lower part.

A bamboo tree is painted on one side and stumps of plum flowers are painted on the other side of the body.

The jar possesses a dim shine that was evenly coated with bluish powder-white glaze.

This kind of jar can be found among buncheong ware with white slip and grayish-green glaze, from the 16th century.

It is especially similar to the porcelain jars of the Ming Dynasty.

The patterns on the shoulder and lower part were continuously used on the jars in the early 17th century.

Considering the light color of the glaze and the images of plum and bamboo, it is estimated to have been made at the kiln in Gwangju-gun, Gyeonggi.

It is believed that a palace artist drew the exceptionally excellent bamboo and plum paintings on the jar.

The jar belongs to the early period of white porcelain with underglaze iron design.

It is an excellent example, boasting harmony in the shape and patterns of the jar.