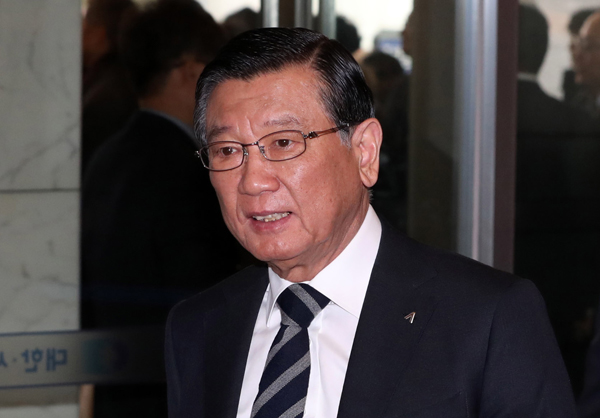 Park Sam-koo, son of the founder of Kumho Asiana Group, announced he was stepping down as group chairman and CEO of key affiliates Asiana Airlines and Kumho Industrial to take responsibility for an accounting blunder and liquidity crisis at the airline.

Park, 74, will also resign as a board member of the two affiliates, leaving him no title at the Kumho Group or any of its affiliates.

“Chairman Park made the decision to assume all responsibility for the confusion,” a source at Kumho Asiana Group said.

Still, Park will maintain influence on management as the top shareholder of Kumho Buslines, a de facto holding unit at the top of Kumho’s corporate pyramid. Kumho Buslines, the country’s largest operator of express buses, holds the largest stake in Kumho Industrial, which, in turn, is the top shareholder of Asiana Airlines with a 33.47 percent stake.

The departure came a day after Cho Yang-ho failed to extend his term as chairman of the board of directors at Korean Air, an event that some observers say might have affected Park’s decision.

Park’s leadership of the group was called into question several times in recent years, but a recent accounting fiasco at Asiana Airlines was the final straw.

Last week, Samil PricewaterhouseCoopers (PwC) released a qualified opinion on the airline’s 2018 financials, saying that it could not determine the value of the carrier due to a lack of information.

Samil PwC said it was not able to confirm liabilities related to the maintenance of leased aircraft and mileage; deferred profits; recoverable losses related to tangible and intangible asset impairment; the fair value of some affiliates' shares; and the consolidated financial statements of Air Busan.

That incomplete financial assessment led the Korea Exchange to suspend trading in Asiana Airlines shares between March 22 and 25.

On Tuesday, Samil revised its opinion from qualified to unqualified, and Korea Exchange on Tuesday lifted the trading suspension. But Samil’s restatement revealed that the country’s second-largest airline faced a serious liquidity crisis.

The previous audit report had revenue for last year at 6.79 trillion won, up 9 percent, operating profit at 88.7 billion won, down 68 percent, and a net loss of 105 billion won.

Under the revised audit, total debt was 6.17 trillion won, a 1.8 percent increase from the previous 6.06 trillion won. The company’s debt-to-asset ratio was at 649.3 percent, 83.4 percentage points higher than the previous year.

Since the airline accounts for 60 percent of the annual revenues of Kumho Asiana Group, the poor results prompted Park to turn to the Korea Development Bank (KDB), a state-run bank, for help.

The group mentioned that Park expressed his “sincere willingness” to turn around Asiana Airlines when he met Lee Dong-gull, chairman of the KDB, on Wednesday.

To replace Park, the two companies will bring in outside figures.

The accounting scandal is only the latest in a string of disputes over Park’s leadership.

Last year, Asiana Airlines was blamed for failing to make and deliver enough in-flight meals due to a fire during a contractor’s construction of a factory in March.

Asiana Airlines employees and minor shareholders at the time staged a protest against Park’s poor management. Park was also criticized for not buying back Kumho Tire and eventually selling the tiremaker to China’s Doublestar.