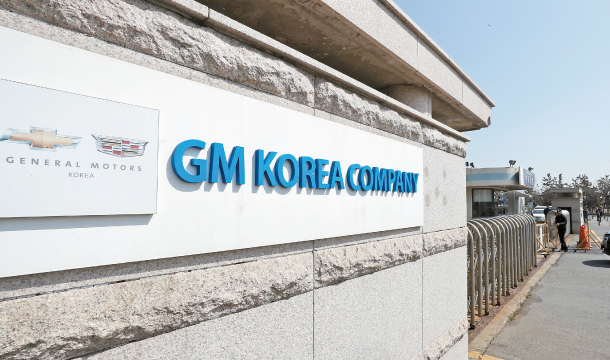 The main entrance to GM Korea’s Gunsan plant in Gunsan, North Jeolla, on Friday. The plant has been shut down since May last year. [YONHAP]

General Motors Korea has found a buyer for its Gunsan plant, which has been shut since May 2018.

The acquirer is a local auto parts supplier to the Hyundai Motor Group. It plans to manufacture electric vehicles (EVs) at the facility.

The transaction is set to be completed on June 28.

MS Autotech, a major Hyundai Motor Group subcontractor, is reportedly looking to use the plant to produce EVs. According to industry sources and the local government, the parts maker will invest total of 200 billion won, including acquisition cost.

While the company is not technically part of the Hyundai Motor Group, its chairman is a former Hyundai Motor and Hyundai Securities executive.

The news of agreement brings to an end to GM’s 23-year history in Gunsan, where the company produced an average of 270,000 cars per year until last May. GM Korea’s plummeting sales forced the company to shut the line, one of its three in the country. The closure led to heated negotiations between GM Korea and its union.

Local governments expect MS Autotech’s acquisition of the Gunsan plant will help the region recover from protracted economic weakness and bring more jobs. The region is estimated to have lost 2.33 trillion won in sales since GM Korea shut down the factory.

When the Gunsan plant shut its operation last year, 1,200 out of 2,000 assembly line workers voluntarily retired. Contracts were terminated for 200 contract employees. Among the 600 remaining full-time employees who wished to stay, 200 of them were sent to work at other GM plants, located in Bupyeong District, Incheon, and Changwon, South Gyeongsang. The rest of 400 workers were put on unpaid leave.

The effect of closure was not limited to GM Korea and its Gunsan plant workers. Around 10,000 workers at subcontractors also lost their jobs.

The region has also been challenged by the Hyundai Heavy Industries shutdown of its Gunsan shipyard in 2017. More than 50 subcontracting companies closed their doors, and around 5,000 workers lost their jobs.

“We thank MS Autotech for deciding to invest in our province, which has suffered great economic difficulties,” said North Jeolla Gov. Song Ha-Jin in a press release. “We will provide incentives, like tax cuts, to stimulate sustainable growth for the company and our region.”

Gunsan said in a press release that it will work with the North Jeolla government to assist MS Autotech and aid early operations. The local governments will also support research.