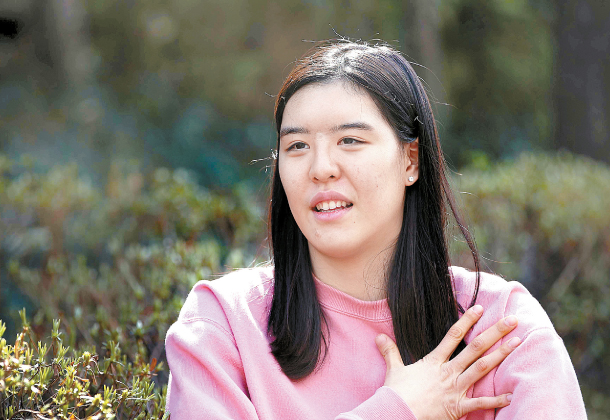 Park Ji-su of the Cheongju KB Stars speaks during an interview in Seoul on Tuesday. [OH JONG-TAEK]

Park’s championship series MVP was even more impressive as she won the award in a unanimous decision, becoming only the second player in the WKBL, after Jung Sun-min during the 2007-08 season, to do so. She also became the youngest player in the league’s history — at 20 years and three months — to be named MVP.

The season is now over and Park, the biggest name in Korean’s women’s basketball, has a busy offseason ahead of her.

But not on the basketball court. Instead, Park, like plenty of other people in their early 20s, is focused on just one thing this spring — BTS.

Park is a die-hard BTS fan. A member of ARMY, the BTS fan club, Park is looking forward to spending the offseason concentrating on the group — even if she has to fly overseas to see them perform.

“On April 7, I’m going to watch a BTS concert in Thailand with my mom,” Park said.

Last month, Park was one of the lucky BTS fans to be able to buy tickets to the upcoming BTS concert in Thailand. But if the Stars’ championship series against the Yongin Samsung Blueminx had lasted until the fifth game, Park might not have been able to attend the concert.

Although that probably wasn’t why Park led the Stars to such a decisive championship win in just three games, she certainly credits the group with how focused she was on the court.

“When BTS finishes its performance on stage, it looks like the members are going to pass out,” Park said. “Just like BTS, I tried to give it my all.”

For Park, 2018 was perhaps the longest basketball season in her career.

Once the 2017-18 WKBL season ended, Park challenged herself to compete in the Women’s National Basketball Association (WNBA) and was drafted as the 17th overall pick by the Minnesota Lynx. The Lynx released Park but she was picked up by the Las Vegas Aces and successfully made the roster. By making her WNBA debut, she became the first Korean player in 15 years to play in the U.S. league.

Although she’s the top player in the WKBL, where she receives 200 million won ($176,270) in annual income, Park was really only average in the WNBA, finishing the season with an average of 2.8 points, 3.3 rebounds and 0.6 blocks in 13 minutes over 32 games.

Then, right after the season ended, Park was given no break as she had to join the inter-Korean women’s basketball team to compete at the 2018 Asian Games. Although she was almost worn out, Park once again excelled by helping the joint team win silver at the Asiad.
Once again, BTS had her back.

“Last year, I was physically tired after playing in the WNBA and Jakarta-Palembang Asian Games,” Park said. “After training, I got rid of my fatigue by watching BTS clips.”

Park comes from an athletic family background. Her father was a former basketball player and her mother was a former volleyball player. Her older brother, too, is an athlete and currently plays for the Cheonan Hyundai Skywalkers of the Korea Volleyball Federation. She started sports by picking up a volleyball in the second grade but quit after only two weeks because she hated training camps.

“When I was a rookie, I was jealous of volleyball’s popularity,” Park said. “But now, I’m very happy to be playing basketball. I feel a responsibility that I should help women’s basketball to bring back its popularity from the past.”

Although Park started her athletic background with volleyball, basketball was still a familiar sport to her thanks to her father’s influence. Interestingly, Park already knew the Stars head coach Ahn Duk-su, even before she made her WKBL debut, as her father used to be roommates with Ahn.

“Until middle school, I called him uncle,” Park said. “But I met him again as a head coach. On television, he is regularly spotted yelling at us, but actually he makes us really comfortable.”

Park’s first attempt in the WNBA wasn’t all that successful, but since her return, her performance has improved. For such reasons, Park is tempted to try one more season in the U.S. league, despite the little pay.