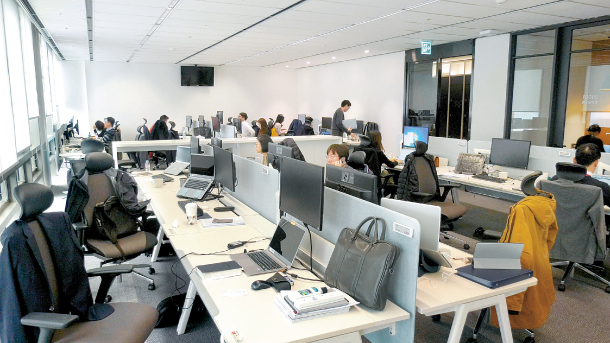 The SK E&S office in Jongno District, central Seoul. Employees work in an open environment, where they can sit wherever they want. [YOUN SANG-UN]

Instead of going to cubicles or to assigned desks, employees arrive and plunk themselves down wherever is best for them and their tasks, whether that is a free desk, a chair or even a sofa. Needless to say, the work area has no partitions.

Inspired to a great degree by Silicon Valley, start-ups in Korea are adopting more haphazard interior design in the hopes that the freedom in the layout will drive innovation. The practice, which was considered until recently decidedly unorthodox, is starting to spread to larger companies with more rigid working cultures.

Finance and manufacturing are taking note.

KEB Hana Bank has joined the trend. The 24th floor of its headquarters in Euljiro, central Seoul, lacks a number of features typical of a financial company. First: no partitions. Only a few items are found on desks, such as coffee tumblers or documents. Empty work stations sit ready with keyboards and monitors. Employees just sit and attach their devices.

A big touchscreen can be found at the entrance. It is used by arriving employees to pick their desk for the day. As more people arrive, the choices become increasingly limited. The first spots taken include desks near windows with good views and corner seats - they go quickly.

“Everybody has a personal preference when it comes to choosing seats,” said a KEB Hana employee Jeong Seok-min, 36. “Seats with outside views or corner seats are popular.”

The work space of SK E&S, an SK group energy company, is more like a luxurious lounge than the office of an affiliate of a major conglomerate. A wood table straight out of a high-end cafe and stylish chairs can be found. On a sofa, several employees sit comfortably staring into their laptops.

No Tae-yoon, a 29-year-old SK E&S employee, said he starts his day fighting for a place using the company’s app. Slots open at 8:30 a.m.

“I lost the obsession to reserve a good seat, but still when I get a good seat, I feel the entire day will turn out to be a good one,” he said.

The current system was put into effect after SK E&S moved into Gran Seoul, an office building located in Jongno District, central Seoul, in September 2018, along with two related companies, SK Lubricants and SK Global Chemical. The original office, located in Jongno District, is being remodeled as a shared office. The Gran Seoul setup is an experiment ahead of the SK affiliate’s move back into the renovated office.

Big corporations are changing the working environment in part to change work culture. The underlying theory is that innovation does not happen so easily in a rigid and conservative working atmosphere. A better environment is seen offering a fresh perspective and leading to better performance.

“The project started from the idea that a free working atmosphere will yield higher productivity and more efficiency,” said Eom Tae-gyun, the KEB Hana manager who directed the seat-system change. “I can see that employees who were first doubtful about the changed culture are fully satisfied with the new system now.”

“The time will come when the creative minority instead of diligent majority will determine the success or failure of a company,” said Kim Soo-wook, a business professor at Seoul National University. “Creating a flexible working culture is necessary in preparing for the future.”

Critics worry that the change from a uniform working environment may come with side effects. They argue that some fields are better suited to a more structured environment.

“The shared office can be burdensome for people in industries like manufacturing, where products must be made with uniform quality and at ever lower costs,” explained Lee Jeong-yeon, a professor at Seoul National University Business School.