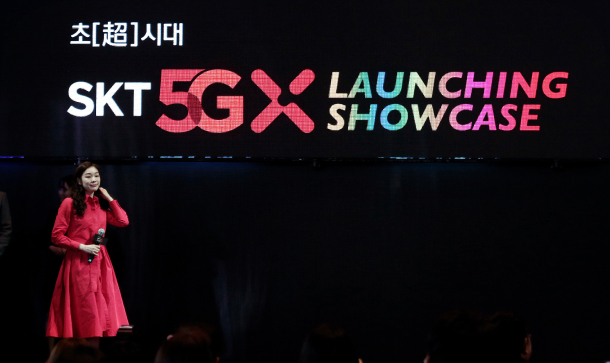 Figure skater Kim Yuna attends a media showcase for SK Telecom’s 5G service in Seoul on Wednesday. Korea’s telecommunications carriers on Wednesday launched their super-fast 5G networks ahead of schedule in an attempt to ensure the country became the first in the world to launch the service. [AP/YONHAP]

5G finally launched in Korea late Wednesday night, beating the rest of the world in what turned out to be a neck-and-neck race to launch the first high-speed network.

One of the first users to get their hands on Samsung Electronics’ Galaxy S10 5G, the world’s first 5G phone, was a woman surnamed Lee, the wife of a KT employee in Daegu.

Her phone was connected to KT’s 5G network at 11 p.m. Wednesday as the three Korean carriers, Samsung Electronics and the Ministry of Science and ICT decided to launch the high-speed network two days before the scheduled date in a desperate move to make sure Korea became the first country in the world to commercialize the network.

Lee said she tried the Narle video-call app provided by KT using the Samsung 5G phone to talk to her husband. The app allows up to eight users to participate in a video conference. Users can don virtual makeup and emoticons and even use augmented reality avatars that follow their motions.

KT said in a press briefing Tuesday that it thinks apps like Narle could be a new communication medium replacing chat apps that gained huge popularity in the 3G and 4G era, since 5G offers at least 10 times faster data speeds than 4G LTE.

Except for the handpicked group of first subscribers, nobody else in the country has been able to use the 5G network until today, when Samsung’s Galaxy S10 5G went on sale.

Today was the day that 5G was expected to launch. That all changed around 5 p.m. on Wednesday when the government found out that U.S. carrier Verizon was secretly planning to launch its 5G service with Motorola’s 5G-upgradable phone Moto Z3 later that day, a week earlier than its publicly announced launch date, April 11. After a quick discussion between the mobile carriers, Samsung and the Science Ministry, Korea planned its own surprise launch later that night.

A Verizon press officer told the Korea JoongAng Daily Thursday that the company issued its official release for launching its 5G network for mobile phones in Chicago and Minneapolis at 9:55 a.m. Wednesday in central daylight time. That was 11:55 p.m. Wednesday in Korea, 55 minutes after the Korean carriers.

As well as being faster, the ministry pointed out that it only counts as a formal commercialization when a consumer has used the 5G service on a 5G phone based on broad network coverage, according to industry sources Thursday. Verizon has only launched its service in limited areas within Chicago and Minneapolis and users only have access to Motorola’s 5G-upgradable phone using a separate add-on modem.

Still, Korea could also face criticism that it launched its first service late at night with a selected pool of customers. Also, while Korean carriers have established a broad 5G network in the greater Seoul area, the wireless network is not available yet in many areas outside of the capital.

The GSMA, the global trade body that represents mobile network operators, is yet to announce which country it considers to have commercialized 5G first.

In the meantime, Korean consumers can now choose whether to convert to 5G, starting today. Since there is only one 5G phone available right now - until LG Electronics rolls out its LG V50 ThinQ 5G on April 19 - there is only one device option for early adopters. When it comes to phone plans, however, there is plenty of choice.

A major issue in the phone plan battle was which company provides the most data at the cheapest cost.

For those looking for the most data for their money, KT’s price plan looks the most attractive as it is the only carrier that offers a fully unlimited data plan with no strings attached.

Three out of four plans offered by KT come with unlimited data offerings without any compromise in speed, known as throttling. The cheapest unlimited data plan from KT comes at 80,000 won ($70), which is actually 9,000 won cheaper than the carrier’s existing unlimited LTE data plan.

For frequent travelers, KT’s two top-tier offerings - priced at 100,000 won and 130,000 won - could be especially attractive as they come with free data roaming in 185 countries. Data roaming speeds differ between the two plans, but even with the cheaper one, there will be no problem using chat apps like KakaoTalk abroad, said Park Hyun-jin, senior vice president of 5G business unit at KT on Tuesday.

Those looking for budget plans may be best served by LG U+. Its budget plan offers 9 gigabytes of data at 55,000 won, 1 gigabyte more than the other two carriers offer for the same price.

Customers should watch out for strings attached to fancy plans offered by carriers as the benefits often have time limits.

For those interested in cool freebies and users of multiple smart devices, SK Telecom’s unlimited data plans could still be a good option. The country’s largest carrier gives out VR headsets to subscribers of its two most expensive plans. On its most costly 125,000 won plan, SK Telecom offers free data for two additional devices such as smart watches and tablet PCs.

Over in the United States, Verizon is offering its unlimited 5G data plans at an additional $10 a month based on a user’s existing 4G LTE unlimited plan. In practice, that means Verizon’s unlimited 5G plans will cost between $85 and $105 per month, a similar price range to the Korean carriers.