A victory at the LPGA Tour’s first major of the year, the ANA Inspiration, allowed Ko Jin-young to become the new world No. 1 on Monday. 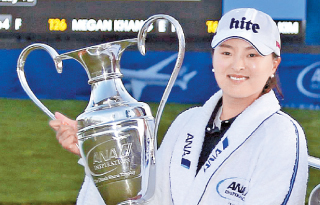 Ko Jin-young poses with the trophy after winning the ANA Inspiration. [GETTY IMAGES/YONHAP]

Ko shot two under par on Sunday to win the ANA Inspiration at Mission Hills Country Club in Rancho Mirage, California. She finished the tournament at 10 under par, 278, three shots ahead of fellow Korean golfer Lee Mi-hyang.

Her second victory of the season, her first major title on the LPGA Tour, was good enough to claim the top spot in the world ranking, knocking down Park Sung-hyun, also of Korea.

Ko now has 7.20 average points, .36 ahead of Park. By reaching the top spot in the Rolex Women’s world ranking, Ko became the fifth Korean golfer to claim the No. 1 spot.

“Reaching world No. 1 is exciting and I cannot believe that I have achieved this honor,” Ko was quoted as saying on the LPGA website. “I always keep my focus on the golf course and on my playing, but to win a major championship and be called the best player in the world is absolutely a great honor. I want to thank my family, my caddie and my manager for all of their support.”

In the updated world ranking, a total of four Korean golfers are in the top 10. Aside from Ko and Park Sung-hyun, Park In-bee was the third highest ranked Korean golfer at seventh, while Ryu So-yeon was ranked ninth.

Ko is having a dominant sophomore season on the LPGA Tour this year. Before the ANA Inspiration, Ko picked up her first win of the season in March at the Bank of Hope Founders Cup in Phoenix. Although she has already won three LPGA Tour events, her victory in March was the first tournament that she has won in the United States.

Following her first win of the season, Ko continued her streak by finishing runner-up at the Kia Classic last week and picking up her second win this week.

In six tournaments so far this season, Ko has had five top-three finishes. Her worse finish was tied for 29th at the Honda LPGA Thailand on Feb. 21.

Ko is also ranked first in the Rolex Player of the Year ranking, at 123 points. Although the 2019 season has yet to reach the halfway point, Ko is already emerging as a strong favorite to win the award as she is a good 67 points ahead of Nelly Korda of the United States.

The LPGA Tour will take this upcoming weekend off, as the golfers are heading to Hawaii to compete at the Lotte Championship, which runs from April 17 to 20 at Ko Olina Golf Club in Kapolei, Hawaii.