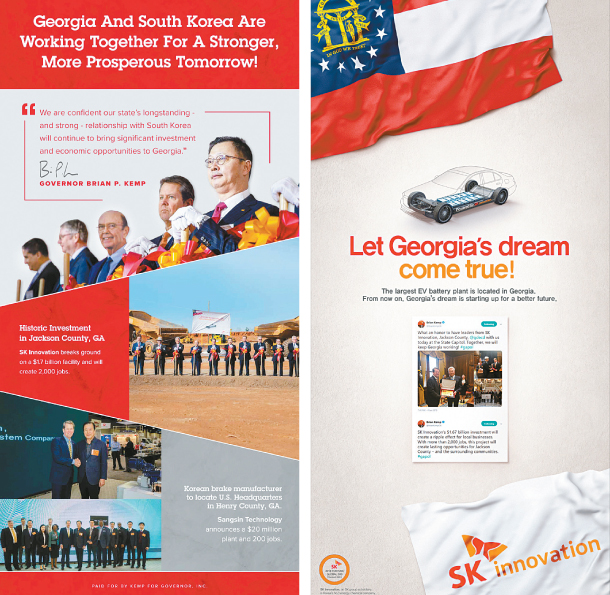 Last week, a full-page advertisement in a newspaper in Atlanta that advertised friendly cooperation between the U.S. state of Georgia and companies from Korea captured readers’ attention.

“We are confident our state’s longstanding and strong relationship with South Korea will continue to bring significant investment and economic opportunities to Georgia,” said Georgia Gov. Brian P. Kemp through the advertisement.

The state government of Georgia attracted SK Innovation battery plant last year, resulting in the state’s largest foreign investment deal in a decade. SK Innovation decided to build a factory in Georgia thanks to Georgia’s pro-business policy, efforts to attract foreign capital and infrastructure such as factory sites, electricity and water. Around $1 billion is expected to be invested by 2022 and $1.67 billion by 2025 in SK’s battery plant. In the advertisement, Georgia also revealed its hope that SK Innovation will create 2,000 new jobs in the state.

In addition, the news that Sangsin Technology America, a Korean company that manufactures brake friction materials and replacement parts, will create 2,000 jobs in Georgia also appeared in the newspaper. Georgia is well known for its pro-business environment and was selected as America’s top state for business for six consecutive years by Consumer News and Business Channel. In addition to SK Innovation making the largest investment ever made in Georgia, Kia Motors made the second-largest investment.

The state government of Georgia selected The Korea Daily, the most-read Korean-American newspaper in the United States, to announce the Korea-Georgia business cooperation to Koreans. Georgia’s special advertisement is seen as a thank-you for SK Innovation’s large investment and proof of the positive relationship with SK, as was shown at the groundbreaking ceremony in March. SK Innovation also expressed gratitude for Georgia’s hospitality through the U.S. media outlet, with the slogan “Let Georgia’s dream come true!”

Additionally, SK Innovation’s investment in Georgia is expected to be a stepping stone for cooperation between the United States and Korea that transcends the boundary between the government and the private sector.