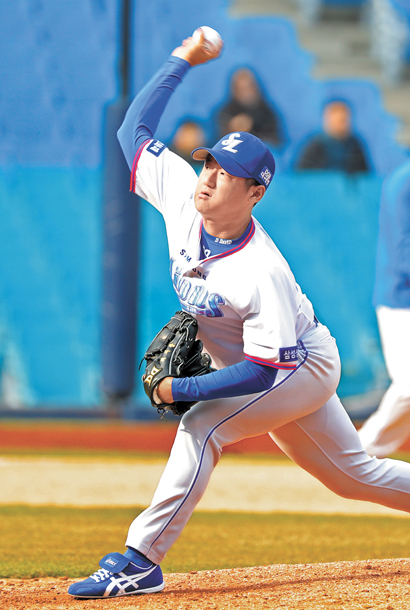 Choi Ji-guang of the Samsung Lions throws a pitch during an exhibition game at Daegu Samsung Lions Park on March 12. [ILGAN SPORTS]

Samsung Lions pitcher Choi Ji-guang is no longer just a player with potential.

Although it’s only the beginning of the season, Choi’s third year in the big league seems different to the previous two years as he’s slowly carving out his own spot in the Lions’ bullpen.

Choi has appeared in seven games so far this season, as of Thursday, and has a 1.86 ERA and a .161 opposition batting average.

Since his debut in 2017, Choi has struggled to make his mark. Over two seasons, Choi has rotated between starter and bullpen but hasn’t been able to find a position he’s comfortable in. His ERA for the two seasons was 7.75.

However, after honing his skills during spring training, Choi has finally started to become the pitcher manager Kim Han-soo always thought he could be.

“Looking at his pitch now, I think he can be the setup man,” said catcher Kim Min-su. “Since his fastball is strong, we can try to win with that fastball. The way it arrives at the mitt has gotten stronger than it used to. And now that [the batters] are not hitting it far, he’s gained confidence.”

Q. What has changed the most since last year?

A. I would say my mental game is the biggest thing. I did get a lot of chances last year and the year before, but I just couldn’t make them count. This year, I’m getting the same chances and it’s heading in the right direction. I’m seeing O.K. results. I think that’s the only difference.

It looks like your pitches have gotten a lot stronger, especially when it leaves your hand. Can you feel the difference?

That’s hard for me to realize, but I did hear quite often from the batters and coaches that the ball that arrives at the batter has gotten better. I’ve once heard that I have good weight transfer. I really don’t think about it much and just throw as hard as I can. I just try to throw it harder and that’s leading my ball to have more rotation and speed. But I don’t really think about the rotation.

You don’t seem to be throwing as many forkballs as you used to. What is the reason behind that decision?

[When I play in the bullpen instead of as a starter,] it’s better to have one or two types of pitches that I’m certain of than throwing lots of different pitches. I’ve put aside my forkball.

Are you confident in your fastball?

I am confident. Coaches Ochiai Eiji and Jong Hyun-wook always tell me to pitch aggressively. I have to make the batters react [to my pitch] and have their bat touch the ball to get a groundball or a fly. Rather than a strikeout, since I’m trying to get them out [aggressively], I think I’m getting the ball count that’s more favorable to me.

You have a signature poker face on the mound. Is that intentional?

I normally don’t get very nervous. But if I show something on my face, that might not look good to the batters or the opponent. So I try to keep a poker face.

I think weight training and sprinting allowed my speed to improve. I’m not sure about this but I think it’ll go up more in the summer.

What are people around you saying about your performance?

There are people that say that I look different now.

Why weren’t you able to perform as well when you first joined the KBO?

I wanted to play well but I couldn’t. I wanted to do well but it just didn’t really work.

You’re not as tall as other pitchers [standing at 5 feet 8 inches]. Is there anything that you do to overcome that?

I’ve done a lot of weight training. I’ve tried to get bigger but there’s nothing else [I can do]. In addition to basic weight training, I’ve added more exercises to improve my flexibility and mobility. After I did all these things, the speed of my pitches just came along.

It would be to play the full season. But I would have to avoid injuries. Also, it would be to find my spot in the bullpen. The number of games and the record doesn’t really matter to me. I can only stay with the Lions [throughout the season] if I don’t get sick. There isn’t a position that I really want to play in yet. Whichever position it is, I’ll pitch accordingly.