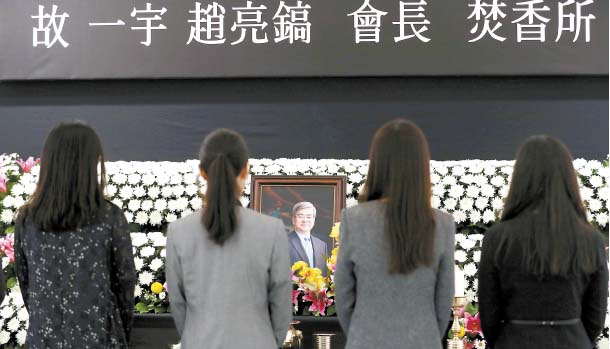 Cho’s body arrived at Incheon International Airport at 4:42 a.m. Friday from Los Angeles on a Korean Air flight. Cho’s only son Cho Won-tae and youngest daughter Cho Hyun-min flew to Seoul with the body. Other family members, including elder daughter Cho Hyun-ah, flew in earlier to prepare for the funeral.

On arrival at the airport, Cho Won-tae, the current president of Korean Air, told reporters that his father’s last words were an instruction to “lead [the company] in harmony with family members.”

He also said his mind “is deeply burdened” and that he will work out pending issues regarding the business in cooperation with other family members.

During the visit, SK’s Chey told reporters, “I feel sad for having lost a respectable figure.”

Huh Chang-soo, head of local business lobbying group the Federation of Korean Industries, praised the late Cho as “a figure who fostered Korea’s aviation and logistics business to a world-class level over the last 45 years” and said “his contribution will be remembered in all businessmen’s hearts” in a written funeral address on Friday.

The company also accepted those offering condolences at its offices in Gangseo District, western Seoul, and in Seosomun-dong, central Seoul. The funeral was organized by a committee led by Suk Tae-soo, the CEO of Hanjin Kal. Suk is known to be a close confidant of the Cho family.

Cho, 70, died from a chronic pulmonary disease at a hospital in Los Angeles on Sunday. His death comes just weeks after he was ousted from the Korean Air board through a shareholders meeting on March 27.

Shareholders blocked Cho from extending his term, largely citing the fact that he was on trial after being indicted on multiple charges including embezzlement. The investigations have been halted following Cho’s death.

After the five-day service, Cho will be buried alongside his father and Hanjin Group founder Cho Choong-hoon in Yongin, Gyeonggi, on Tuesday.