After historic abortion ruling, what comes next?: With ban abolished, both sides of the issue hope voices are heard

After historic abortion ruling, what comes next?: With ban abolished, both sides of the issue hope voices are heard 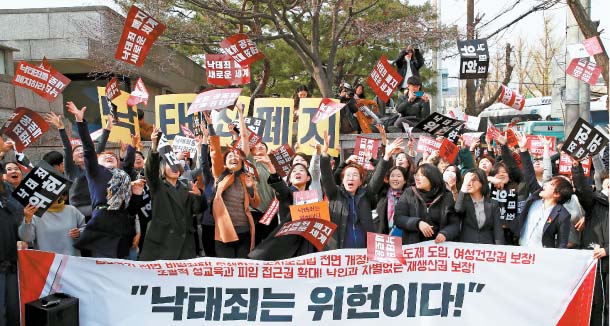 On Thursday afternoon, the Constitutional Court ruled that Korea's decades-old abortion law “is an unconstitutional rule that infringes upon the women’s rights to self-determination” and called for an amendment to the law.

The Constitutional Court ordered the National Assembly to revise the current Criminal Act by Dec. 31, 2020. The current law will no longer stand if no revision is made by then.

With the court's “uncomfortable” ruling - a lighter form of judging a law as unconstitutional that gives the legislature time to revise it - the National Assembly now has a little more than a year and a half to come up with new regulations that align with the Constitutional Court’s decision. Whereas the current law bans all abortions with the exception of a few very clear and limited conditions, the ruling says that “an absolute ban on abortion denies and deprives women of the right to pursue their own destiny” and the law "must allow women to decide freely."

Thursday’s ruling marked a pivotal moment for human rights in Korea and groups on both sides of the issue responded strongly. While abortion rights advocates welcomed the decision with excitement for the future, anti-abortion groups expressed their concerns about the havoc they believe that may arise from the decision and called for the revised law to contain a means to persuade women to continue their pregnancy.

Abortion had been deemed illegal since the inception of the Criminal Act 66 years ago. While Article 269 states that women who have an abortion can face imprisonment for up to a year and a fine up to 2 million won ($1,762), Article 270 punishes the medical professional who conducted the procedure with a maximum jail time of two years. Exceptions are laid out on Article 14 of the Mother and Child Health Act, giving “limited permission for induced abortion operations” to cases in which the parents suffer from diseases, a woman who has been impregnated by rape or incest, or in cases in which the birth of the baby “severely injures or is likely to injure the health of the pregnant woman.”

This did not keep women from actually undergoing abortions, however. According to a study conducted by the Ministry of Health and Welfare in 2011, nearly 170,000 abortions are estimated to be carried out each year by women aged 15 to 44, which the Constitutional Court cited as one of the seven reasons why the current law goes against a woman’s human rights. The petition that the court reviewed was submitted in February 2017 by an obstetrician prosecuted for performing 69 abortions from 2013 to 2015.

A ruling in August 2012, the first time the Constitutional Court ruled on the issue, was met with a 4-4 decision, deeming the law constitutional.

The case for this year's ruling focused more on the life of the woman rather than the potential of the fetus.

“The fetus in itself is a living thing separate from the mother and, the fetus is very likely to become a human being and should enjoy the right to life as well,” read the final decision in 2012. It said that an abortion puts a woman’s personal and private interest over the greater interest of society, which is the life of the fetus.

Seven years later, the focus changed. “The state forbids women from any and every abortion without fully endeavoring to make social and institutional improvements to protect the life of the fetus by imposing legal restrictions and punishments for the women,” reads the new decision.

“Nurturing a child requires a woman nearly 20 years of endless physical, mental and emotional effort, which may cause various socioeconomic issues such as the high economic cost, the hardships they may face in the workplace and other social situations and the difficulty in pursuing their studies. These situations are aggravated by sexist conventions, a patriarchal culture and the appalling [lack of] support they get in raising children,” the ruling says.

It also took into account other realistic issues like the fact that the rule has not been effective in actually keeping women away from abortions, and that it has only been used as a means for men to attack women. The law also did not take into account the different situations in which women may need abortion and have to bear the burden themselves.

Left: Anti-abortion activists stand outside the Constitutional Court in central Seoul on Thursday morning holding cards reading "We urge for the abortion law to be kept." Right, members of Safe Abortion - an alliance of 23 civic organizations - hold a press conference to discuss the next steps to be taken. From left are Arm, Nayoung, Moon Seol-hee, Jay, lawyer Ryu Min-hee and doctor Oh Jeong-won. [NEWS1, YONHAP]

Activists from both sides were outside the Constitutional Court on Thursday morning awaiting the decision. The ruling, which came as one of 15 agenda items on the court’s plan that day, came just before 3 p.m.

“Today is a day of triumph in which we have brought historical progress for the first time in seven years,” said Moon Seol-hee, the co-chairman of Safe Abortion, Korea’s largest abortion rights activist alliance, which is made up of 23 civic organizations.

“We are calling for the abolishment of the abortion law with our slogan ‘If abortion is a crime, then the criminal is the state.’ We have pointed out that the history of the abortion law is established upon the state’s negligence, passing on the responsibility to women by punishing them for [going against] the [state's] economical end.”

“We have been hoping that the law would be abolished in a way that thinks about what the state can do for society, not punish women for [having an abortion],” added Nayoung, the co-chairman of the organization.

“We now see for the first time since the Criminal Act was put forth 66 years ago that ‘abortion’ is not a crime but that the ‘abortion law’ is an infringement on our human rights. The historical ruling is a precious achievement, made by so many of those who fought bravely and stood together.”

Opposing voices, which mostly came from conservative civic and the religious - namely Catholic - groups, expressed their disappointment with the ruling.

“We express our deep concerns over the ‘uncomfortable’ decision made by the Constitutional Court,” said the Catholic Bishops' Conference of Korea through an official press release. “The verdict not only denies the fetus’s right to life that is granted to them in the moment of their fertilization, which they have no power to protect on their own, but also lays the burden of an unwanted pregnancy on the women and unfairly exempts men.”

A civil alliance of 79 organizations against abortion also shared their dismay, calling the decision as “anachronistic and unscientific.”

“The consensus has beaten the rules of nature, and politics has beaten life science. It is inconsistent for the state to allow an innocent life in formation to become killed … The Constitution upholds the rights of ‘all’ life. The fetus is granted the right to life, as life in formation is life indeed,” the organization said through an official press release.

Kim Dong-suk, chairman of the Korean College of Ob & Gyn shared a neutral opinion on the decision on the behalf of the medical community, speaking strictly on a medical basis. “Doctors cannot speak from a non-medical point of view,” Kim said. “But the conventional Mother and Child Health Act had neither been medically valid, nor did it assure the well-being of women.”

The deadline asks the National Assembly for new regulations, and until they are set forth, the current law stands in effect. It is now up to the legislature to begin their research and come up with new guidelines for people to follow. Questions range from whether the new law will allow abortions for anyone, regardless of how many weeks they are into their pregnancy, to whether the procedure will be covered by health insurance and if the government will allow abortion pills (Mifepristone) to be prescribed.

Of all that needs to be considered, Safe Abortion stressed the urgency for changes in the medical and legal fields. On Friday, the alliance held a press conference to follow up on the Constitutional Court’s decision on Thursday, welcoming the ruling, while at the same time pressing for necessary changes to be discussed in the coming days.

According to Ryu Min-hee, a lawyer from Korean Lawyers for Public Interest and Human Rights, a human rights lawyers’ association, while the law still exists, it is “practically dead” and should not bind any entity legally.

“The decision means that the Constitutional Court sees how the abortion law has been infringing on women’s human rights,” she explained. “A woman should be able to choose on her own whether she will continue the pregnancy or not, depending solely on her own status and her beliefs. The [Constitutional Court] has now accepted that aborting a pregnancy is a right that women should be granted, not a crime that should be punished. All the policies and regulations that follow should be pointed in that direction.”

Doctor Oh Jeong-won from the Association of Physicians for Humanism highlighted the need to educate both public and medical professionals, for operations to be carried out at public hospitals and, most pressingly, to allow the import and purchase of Mifepristone in Korea.

“According to the World Health Organization’s guidelines, Mifepristone is vital for the safe abortion of a women’s pregnancy, especially in the early stages of the pregnancy,” said Oh. “Abortion is a medical act that requires the quickest response possible, as the dangers and the methods [of termination] change with each stage … If anyone should choose to terminate their pregnancy, then they will be able to do so regardless of their situation, at an amount they can afford. This is a way of minimizing the dangers that come with terminating a pregnancy.”

Jay from Safe Abortion added, “We have so many administrative missions ahead of us because of the long time we’ve lived under an unfair legal system. People still suffer from the red letter written on them after an abortion as people continue to blurt out violent and vicious words after the Constitutional Court’s decision. Ultimately, we have to fix society as a whole.”