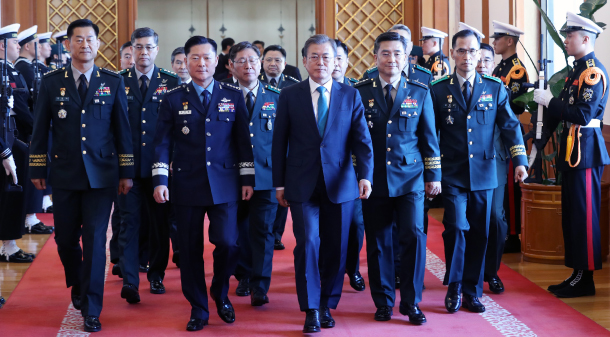 President Moon Jae-in, center, moves into a reception room in the Blue House along with military leaders who attended a ceremony where they were promoted to higher ranks on Monday. [YONHAP]

“It is time to actively prepare for and push forward an inter-Korean summit,” Moon said in opening remarks at the senior secretariat meeting at the Blue House Monday. “North Korea has demonstrated its intention to continue talks.”

“As soon as the North’s conditions are satisfied, I hope the two Koreas will sit down, regardless of place and format, to have a specific and substantial discussion on a plan to produce an outcome that goes beyond the two North-U.S. summits,” Moon said.

“In his speech after being re-elected as the State Affairs Commission chairman, Kim once again declared his strong determination for the denuclearization of the Korean Peninsula and the establishment of peace,” Moon said. “He also expressed his intention to resume North-U.S. dialogue and hold a third North-U.S. summit. I highly appreciate and welcome Kim’s unwavering will.”

Moon said his summit with Trump removed uncertainties raised after the North-U.S. summit in Hanoi, Vietnam, collapsed in February. “We agreed that the top-down method based on will and trust among the leaders of the two Koreas and the United States are crucial in the peace process for the Korean Peninsula,” Moon said.

Moon’s message was clearly a response to Kim’s speech to newly-elected members of the North’s rubber stamp legislature on Friday. Kim said in the speech that he is willing to try a third summit with Trump, but only if the United States changes its approach. Kim also said he will wait for a “bold decision from the United States with patience until the end of this year.”

In the same speech, Kim demanded Moon stop acting as an “officious mediator,” but Moon did not comment Monday on the criticism. Moon, instead, said his administration is determined to implement inter-Korean agreements step by step, even if there are obstacles.

Moon also said he won’t be restricted by location or format to have his fourth summit with Kim, indicating that he will not hold Kim to a promise to meet next in Seoul.

Moon had his first summit with Kim in Panmunjom last April and another one in May. Moon visited Pyongyang for the third summit last September, and Kim promised a reciprocal visit to Seoul before the end of 2018. The promise was not kept.

Moon stressed that he wants to have a specific and substantial discussion with Kim, indicating that he would seek more than simply arranging a North-U.S. summit when he meets Kim for the fourth time.

In last week’s summit with Trump, the U.S. leader also asked Moon to inform him about the North’s position after any inter-Korean contact, suggesting that an upcoming inter-Korean summit, if it takes place, will address a more specific nuclear deal to be used in a possible Kim-Trump summit later.

Kim said in his Friday speech that the South must end its dependence on the United States, but Moon stressed Monday the importance of the South-U.S. alliance.

“The South and the United States agreed to closely cooperate to create a virtuous cycle of inter-Korean talks and North-U.S. talks,” he said.

“Moon’s message that he will sit with Kim anytime has various meanings,” a Blue House official told the JoongAng Ilbo. “There is no discussion with the North yet, but we need to consider all possible circumstances including a possible visit by Trump to Korea in May or June.”

Speculation is high that Moon will discuss a plan to dispatch a special envoy to Pyongyang to arrange an inter-Korean summit, but Ko Min-jung, deputy spokeswoman of the Blue House, said the issue was not deliberated at the senior secretariat meeting. Moon’s opening remarks made no mention of a special envoy.

Moon is scheduled to visit three Central Asian countries from today through April 23, and Chung Eui-yong, head of the National Security Office, will not accompany him. Speculation grew that Chung could visit Pyongyang as a special envoy as he did in March and September of last year. At the time, National Intelligence Service Chief Suh Hoon also visited the North.