Two clubs tied for the most championships at the Korea Football Association (FA) Cup will square off in the round of 32 this week, with only one of them getting a chance to pad its resume. 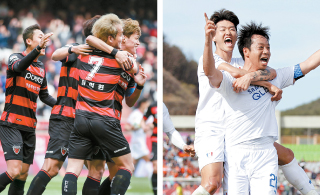 Suwon Samsung Bluewings and Pohang Steelers, both of the top-flight K League 1, will meet at 7:30 p.m. today at Suwon World Cup Stadium in Suwon, 28 miles south of Seoul.

Suwon and Pohang have each won four FA Cups, more than any other team. This is the 24th edition of the national tournament open to professional and amateur clubs.

Suwon’s last title came in 2016, while Pohang haven’t won since 2013. They each have three runner-up finishes, too.

This will be their fourth meeting at the FA Cup. They’re dead even in the three previous meetings with one win, one draw and one loss - the lone draw being a penalty shootout victory by Pohang in the inaugural FA Cup final in 1996.

This will be the earliest stage of the FA Cup that they’re playing each other. They have previously met in the final twice and in the quarterfinals once.

Suwon have been playing better of late. After dropping the first three matches of the season, they have gone undefeated in the four ensuing contests, with two wins and two draws. They’re currently in eighth place at 2-2-3 (wins-draws-losses).

Pohang lost two straight matches out of the gate before getting their first W in match No. 3. They have had one win, one draw and two losses since for a 2-1-4 mark for the season, which puts them in ninth place.

In another K League 1 clash in the FA Cup, Gangwon FC will host FC Seoul in the round of 32 in Chuncheon Songam Sports Town in Chuncheon, Gangwon.

The two met at the very venue just last Sunday in a controversial K League 1 match. Seoul prevailed 2-1, with a video assistant referee (VAR) review coming into play on both of their goals.

Aleksandar Pesic’s first goal in the 24th minute appeared to be wiped out on an offside call, but the initial ruling was overturned in a video review. FC Seoul was awarded a penalty in the 55th minute after forward Cho Young-wook was brought down in the box. The call stood after a video review, and Pesic converted his spot kick to make it 2-1 for Seoul.

Elsewhere in the round of 32, defending FA Cup champions Daegu FC will face Suwon FC from the second-tier K League 2.