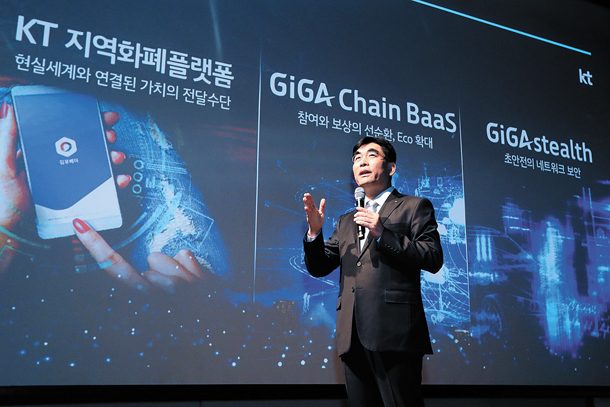 With the start of the highly connected 5G era, KT launched a blockchain-based platform with the goal of raising information security for users.

GiGAstealth hides internet protocol (IP) addresses to uncertified users while GiGa Chain BaaS creates an environment for users to develop and operate blockchain-based services through the company’s cloud system, uCloud, according to KT. Chakhan Pay is a digital payment platform.

“The 5G era has created a field in which everything - from device to device, device to data and device to human - is connected,” said Lee Dong-myun, president of KT’s future platform business group, at a press event held in central Seoul Tuesday.

Such a platform will play a central role in the era of the fourth industrial revolution, according to Lee.

With GiGAstealth, KT plans to solve security issues raised by the Internet of Things (IoT) market. GiGAstealth only reveals an IP address of a device to certified transmitters, which thereby lowers the chance of getting hacked, according to KT. Each device is given an encrypted ID.

“Instead of only partially protecting a network, seen from other 5G security technologies, GiGAstealth can protect the entire network with the application of blockchain, offering end-to-end IoT security,” said KT.

IoT, which is expected to mushroom with 5G networks, enables services like connected cars and smart factories.

The specific launch date for GiGAstealth hasn’t been decided, but it should be within this year.

GiGA Chain BaaS, launched last month, provides a platform for users to develop blockchain-based services on the company’s cloud. A user, for example, is able to create nodes without professional help. Nodes are where blocks of data are stored.

Smart contracts, pieces of code that can be programmed on a blockchain, and faster transactions per second are other features of the KT platform.

Chakhan Pay provides a digital transaction service that guarantees safer distribution of money within a region, according to KT.

Platform users can purchase an item by scanning a QR code with a smartphone and filling in the amount that needs to be sent to a vendor. The transaction information is saved on a blockchain. The service, which does not demand commission fees, was launched in Gimpo, Gyeonggi, last month. KT plans to expand the service to other regions.

Together with the Ministry of SMEs and Startups, KT also plans to issue digital gift certificates through businesses that use the Zero Pay system. Zero Pay is a mobile transaction system, which Seoul City sponsored with the goal to reducing processing fees for small merchants.