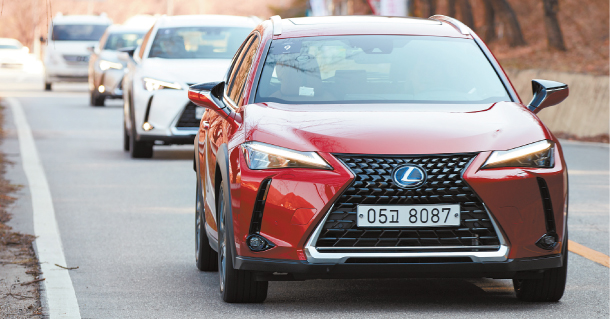 The Lexus UX rolls along country roads in Gyeonggi on April 2. [LEXUS KOREA]

In the crowded compact sport-utility vehicle (SUV) market, Lexus is continuing its hybrid push with its first offering for the segment, the UX250h.

On a 50-kilometer (31-mile) drive from Jamsil, southern Seoul to Gapyeong County in Gyeonggi on April 2, the hybrid vehicle stood out from the competition with a flashy profile and solid performance.

At first impression, the UX retains the striking design of the Japanese automaker with a large spindle grille and sharp headlamps. The loud visual continues with a rear combination lamp that stretches across the back and, somewhat unusually, protrudes from the body.

Overall, the design of the UX is a breath of fresh air compared to the majority of compact SUVs, which have a rounded and restrained design to suit their smaller size. 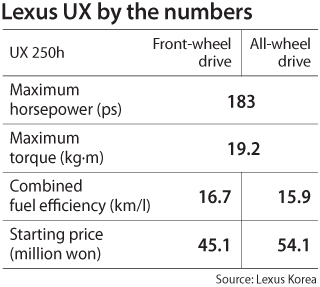 A Lexus Korea spokesperson said the vehicle is targeted at first-time car buyers and through its low profile, it produces a confident and exciting performance that even beginners will appreciate.

Coming in at just 1.52 meters (5 feet) tall, the UX is a short vehicle compared to the competition. Comparable premium compact SUVs such as Volvo’s XC40 and Jaguar’s E-Pace are both 1.64 meters tall.

The low center of gravity coupled with a short turning radius produced quick, agile movements during turns on curvy hillside roads. The new platform structure used in the vehicle - which, according to Lexus, strengthens rigidity - creates a stable and confident ride.

The UX’s hybrid system isn’t anything to brag about, though. With up to 183 horsepower and 19.2 kilogram-meter (138.9 pound-foot) in torque, the UX taps out at a lower level than Volvo’s XC40.

On highways, the UX was more restrained considering its size and performance figures. Its continuously-variable transmission, which mimics gear changes, however, didn’t have the artificial feel commonly found in vehicles fitted with the system and produced seemingly natural gear shifts during acceleration.

Despite the fun driving experience through its punchy performance, the vehicle comes with a mixed bag of advanced and outdated technology.

Like other premium offerings, the UX comes equipped with smart safety features including pre-collision assist and lane tracing assist and the software helps to improve the overall driving performance by alerting the driver when steering off the lane.

The hardware in the UX, however, is unintuitive and lags behind not just its competition but also automakers that charge way less.

The wide 10.3 inch display is a joy to look at, but like other Lexus models, it does not support a touch-based interface and instead relies on a remote touchpad next to the shift stick.

While the tactile feedback from the touchpad conjured nostalgic memories, they were soon replaced by aggravation trying to navigate through the outdated menu with constant clicks.

Considering that the company is targeting first-time car buyers who will likely be used to touchscreens over touchpads, the decision to incorporate an outdated feature is disappointing.

The vehicle sports a center console that is slightly tilted to face the driver. Lexus said that it created a “driver-inspired cockpit” so that controls are more conveniently placed for whoever is in the driving seat.

Instead of volume and audio knobs on the center console, they are placed below the remote touchpad in a horizontal position. While Lexus may claim that this is more ergonomic, not every driver is guaranteed to like it.

As for interior space, the vehicle is comfortable in the front row, albeit cramped in the second row. While there was some leg and head room for this five-foot-nine reporter, longer rides will likely be uncomfortable for an average-sized male adult.

The UX provides small space for cargo that can be extended with the foldable second row seats.