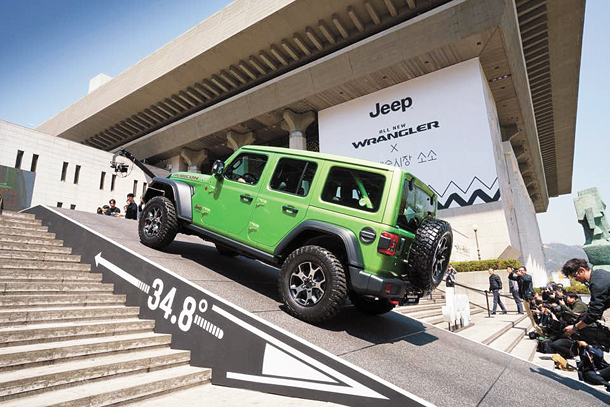 Jeep’s Wrangler Power Top 4-Door climbs up a steep ramp on the stairs at the Sejong Center for the Performing Arts during a media event held Wednesday in central Seoul. [FCA KOREA]

Fiat Chrysler Automobiles (FCA) Korea added three more versions to its all-new Jeep Wrangler SUV lineup in Korea on Wednesday in a bid to hit double-digit sales growth by the end of this year.

“We are pretty confident that [double-digit growth] will work out,” Pablo Rosso, CEO of FCA Korea, told the Korea JoongAng Daily on the sidelines of a media event held in Gwanghwamun, central Seoul, Wednesday.

According to the Italian-American automaker, Jeep’s Wrangler lineup has been showing steep growth over recent years, especially with the first fully changed Wrangler in 11 years rolling out in Korea in August.

Rosso said the company hopes to maintain sales growth of its iconic off-roader by expanding the target customer base of the car.

“What we are trying to do is to give the opportunity to more people to get to know Wrangler, and that’s why we are launching many different trims,” Rosso said. “I think in the past, Wrangler customers were very off-road-oriented.”

The company said the 2-Door version could cater to the needs of off-road enthusiasts. The car comes with a shorter wheelbase and higher break-over angle - the angle a vehicle can drive at without its undercarriage touching the ground - compared to the 4-Door versions, enabling the car to more easily handle different off-road conditions. A shorter wheelbase enables the car to turn more easily with less room.

The Overland 4-Door is designed for urban drivers who would like to use the SUV every day. FCA Korea emphasized that the car comes with improved on-road driving performance.

The Power Top 4-Door suits trend setters and off-road manias, according to FCA Korea, introducing it as a “multiplayer.” It has a soft-top cover that can be opened up with the press of a button.

As for the whole Jeep brand, the company is targeting 10,000 sales this year. To achieve that, Rosso said the automaker will continue on with its so-called Jeep-focused strategy rather than its non-SUV lineups branded under Fiat and Chrysler.