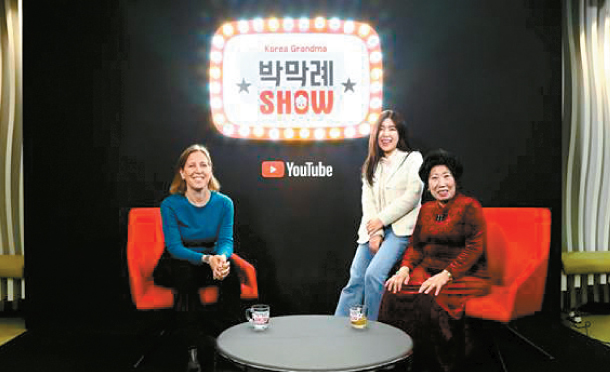 The 73-year-old YouTube influencer Park Mak-rye met up with Susan Wojcicki, YouTube CEO, in March and held her own “Park Mak-rye Talk Show,” which was uploaded on her channel on Sunday.

Park, who goes by the name “Korea Grandma,” has over 800,000 subscribers on her channel. She became famous for her straightforward and often snappy remarks which draw laughter from her viewers. The channel was actually started by her granddaughter, who wanted to record her grandmother while she has fun.

When Park received a Silver Play Button from YouTube in 2017 for reaching 100,000 subscribers, she personally thanked Wojcicki for the award. Last year, Park also had the opportunity to visit the Google headquarters in California as a Korean representative. She tried to meet up with Wojcicki then, but couldn’t.

Finally, their meeting was realized when Wojcicki visited Korea last March and featured as a guest on Park’s talk show.

After their talk, Park also opened a special cooking class for Wojcicki and the cast, teaching her how to make gimbap, seaweed rice rolls.