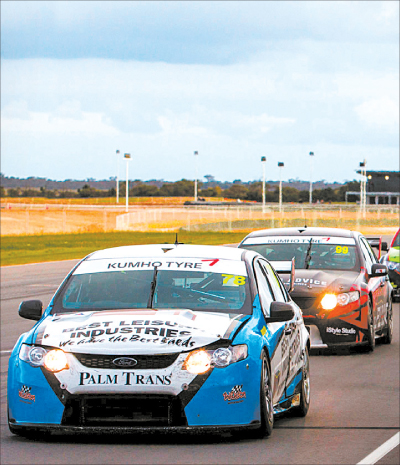 On April 14, Kumho Tire, Korea’s high-performance tire company, became the exclusive official tire sponsor for both the China Formula 4 Championship and the Super3 Series in their opening races at the F1 Circuit in Shanghai and the Philip Island Circuit in Australia.

Officially approved by the Federation Internationale de l’Automobile (FIA) and the Federation of Automobile and Motorcycle Sports of the People’s Republic of China (CAMF), the China Formula 4 Championship is the country’s largest formula event, serving as a stepping stone for racers aiming to compete in higher-tier races.

It has gained significant popularity in China. This season’s event consisted of six rounds and began in Shanghai. Participating racers drove cars with 2-liter engines at circuits in cities including Shanghai, Zhuhai, and Qinhuangdao.

Hosted by the Confederation of Australian Motor Sport (CAMS), the Super3 Series has received an exclusive tire sponsorship from Kumho since 2008. The event was known as the V8 Touring Car Series until last year and received its current title after becoming affiliated with the Supercar Series, the largest motor sport competition in Australia. The Super3 Series consisted of five rounds this season and 15 vehicles vied for the top spot.

Kumho has been providing these two events with Ecsta S700 and W700 tires. These two racing tire models are the culmination of the company’s technological prowess, offering excellent traction in various driving conditions and reliable handling for fast driving.

Kumho has been actively involved in Korea’s motor sports as well. It runs the Ecsta Racing Team, which participates in the CJ SuperRace 6000 Class, and has either provided racing tires to motor sport events such as the CJ SuperRace GT Class and the Hyundai AVANTE Cup or has sponsored teams that participate in them.

“Tires connect the vehicle and the circuit and play the most important role in dealing with speed, pressure and extreme racing conditions such as sudden braking and curves,” said Kim Sung, the managing director of G. marketing at Kumho. “As a global brand and the official sponsor of various motor sport events at home and abroad, we are proud to have been recognized for our technological expertise.”