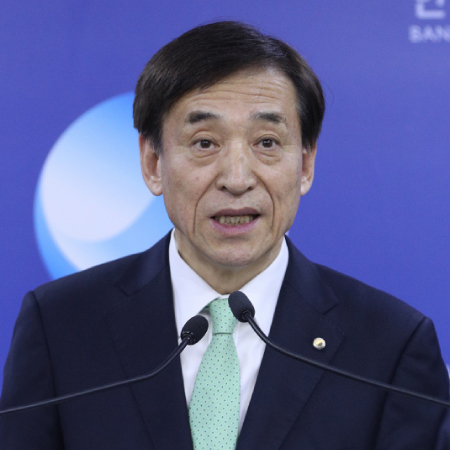 The government must come up with policies to boost corporate investment, Bank of Korea Gov. Lee Ju-yeol said, though he added that the recent bad news on economic growth should not be interpreted too negatively.

His comments came as analysts stared to suggest that interest rates should be cut.

“We need to see the situation seriously,” the central bank governor said Friday during a meeting with financial institution leaders.

“With regard to first-quarter growth numbers, external conditions are unfavorable and private sector vitality has been weakening, especially in terms of export and investment as the semiconductor industry has been slowing down,” Lee said. “Also, the government contribution has declined significantly, which is unusual.”

The central bank on Thursday released the first-quarter report. When compared to a year ago, the Korean economy between January and March grew 1.8 percent. This was the slowest in a decade.

But when compared to the previous quarter, the economy had contracted 0.3 percent, the worst performance since the economy contracted 3.3 percent in the fourth quarter of 2008.

The disappointing growth was alarming, especially as the quarterly decline came despite the lack of any major local or global crisis.

The market responded decisively to the news, as the Kospi lost 0.48 percent Thursday and the won depreciated from 1,150.9 won on Wednesday to 1,160.5 won on Thursday.

The won depreciation was the sharpest in two years and three months.

Doubts are growing as to whether the economy will achieve to government growth target of 2.6 to 2.7 percent this year, even with the 6.7 trillion won ($5.8 billion) supplementary budget.

The Bank of Korea last week adjusted its growth outlook from 2.6 percent to 2.5 percent, and it projected the economy to expand 2.3 percent in the first half.

But in order to achieve this goal, the economy’s quarterly growth in the April to June period would have to reach 1.5 percent, which would be a considerable jump.

The environment is particularly dire, with exports showing no signs of improving. The Korea Customs Service on Monday reported that in the first 20 days of this month alone, exports fell 8.7 percent.

Exports have been on the decline for the last four months.

The 6.7 trillion won stimulus budget is unlikely to get passed anytime soon as lawmakers are currently clashing over election law reform, which could delay the reviewing of the budget proposal.

There are even doubts as to how much impact the supplementary budget would have on the economy. Even if it passes, it would likely go into effect around the third quarter.

“The supplementary budget announced by the government would only raise economic growth by 0.1 percentage points,” said Joo Won, a Hyundai Research Institute director.

“Unless exports come alive, the annual GDP growth rate could fall to 1 percent.”

He said it is time for the bank to consider lowering key interest rates. The Bank of Korea base rate has been at 1.75 percent since November 2017. It was at 1.25 percent, a historic low, through November 2017.

The International Monetary Fund in March said that Korea should pass a supplementary budget equal to 0.5 percent of the GDP and that the central bank should adopt a more accommodative monetary policy.

“As the growth rate has veered from the government’s and the central bank’s projections, and government fiscal support is weakening, it is likely that the central bank will lower interest rates in the second half,” said Kang Seung-won, an analyst at NH Investment & Securities.

“We cannot predict that this negative growth will continue,” Lee said. “The government’s contribution to growth will recover fast.”

He added that while uncertainties remain high, the global market will gradually improve.

“The U.S. and Chinese economies, which were weak at the beginning of the year, are recovering faster than previously expected,” Lee said.

The governor emphasized the need to boost corporate investment in order to help the economy expand.

“Now is the time when policy efforts could actually breathe vitality into corporate investment, which is the engine of economic growth,” Lee said.