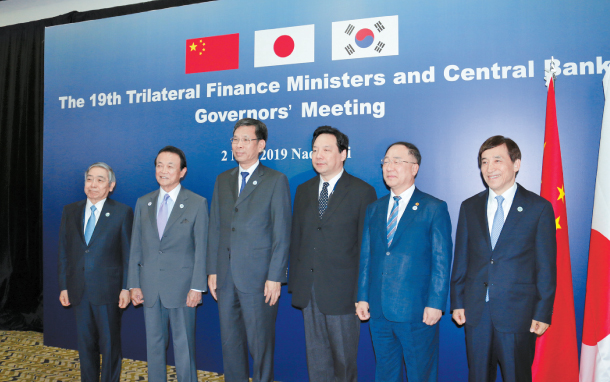 The finance chiefs of Korea, Japan and China agreed to resist all forms of economic protectionism and strengthen the regional financial safety net at a meeting on Thursday.

Another area of discussion concerned expanding coverage of the Chiang Mai Initiative Multilateralization, a multilateral currency swap arrangement focused on the Association of Southeast Asian Nations (Asean) countries and the three major economies.

The leaders agreed to erase terms and conditions on the foreign liquidity support provided by the Chiang Mai Initiative in times of crisis.

Presently, the maturity of funds linked with the programs from the International Monetary Fund (IMF) is one year, and a member country can extend this two times. But the latest amendment removed the cap.

The joint statement called for “the early entry-into-force” of the amended agreement.

To bolster the standing of the initiative and increase the size of the fund, the leaders from the Asean nations and the three countries will discuss ways to provide supportive funds in yen, yuan or won instead of dollar.

Before the meeting, BOK Gov. Lee also said he expected no major impact from the U.S. Fed’s monetary policy meeting.

“The result was in line with expectations,” Lee told reporters.

The Federal Reserve announced on Thursday that it held the benchmark interest rate steady at a target range of 2.25 percent to 2.5 percent, highlighting that inflation was running below its target.