For the second straight year, the Doosan Bears were the winners of the Children’s Day Jamsil Derby against the LG Twins. 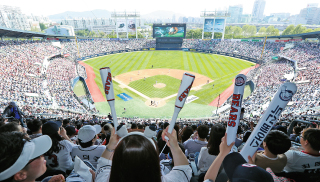 A sellout crowd at Jamsil Baseball Stadium in southern Seoul takes in the Children’s Day game between the Doosan Bears and the LG Twins on Sunday. [ILGAN SPORTS]

After sweeping the weekend series, the Bears are now second in the league with 25 wins and 12 losses. While the Bears have one more win, the SK Wyverns are atop the rankings because they have a slightly better winning percentage.

“The Children’s Day match is the most important game out of the 144 games in a season,” said the Bears manager Kim Tae-hyung. “We had a rough start this week, but I’m thankful that our players showed great teamwork and finished strong.”

Bears outfielder Jung Soo-bin was injured and the team’s manager was fined for verbal abuse during a game against the Lotte Giants on April 28.

Last season, the Bears had a record of 15 wins and one loss against the Twins. Although Twins’ captain Kim Hyun-soo promised to “pick up 16 wins” against Doosan this year during the preseason media day press conference, the Bears are once again pulling ahead of their Jamsil rival.

The Twins took home two wins and a loss during the first Jamsil Derby of the season, held from April 12 to 14. But after the Bears’ Children’s Day series sweep, they are ahead with four wins and two losses.

Before Sunday’s game, Twins’ starter Cha Woo-chan had the lowest ERA in the league, at 1.50, but he wasn’t able to keep up his streak against the Bears. Through three innings, Cha gave up six runs to pick up his first loss of the season. Against the Twins, the Bears’ starter Seth Frankoff shutout the Twins, tossing six scoreless innings to pick up his second win of the season.

The sweep was even more disappointing for Twins fans because the team had just come off of an eight-game win streak.

The derby on Children’s Day weekend has been an annual tradition for the two teams that have shared Jamsil Baseball Stadium since 1996.

Jamsil was home to the only sold out game in the league on Saturday. On Sunday, all 25,000 seats at the stadium were sold out 44 minutes before the first pitch - the 12th year in a row that the tickets have sold out on Children’s Day.

The Bears extended their Children’s Day record to 14 wins and nine losses.

The Hanwha Eagles also had a sellout game on Children’s Day against the KT Wiz at Daejeon Hanbat Baseball Stadium. In front of a crowd of 13,000, the Eagles won Sunday’s game 6-4 and took the series 2-1.

With the win, the Eagles held on to their sixth spot in the league ranking with 16 wins and 18 losses, while the Wiz continue to struggle at the bottom of the table with 11 wins and 26 losses.

The Lotte Giants failed to sell out their home games against the SK Wyverns over the weekend and disappointed the fans that did attend by losing all three over the weekend. The Giants are in the middle of a five-game losing streak and dropped down in the rankings to tie for eighth along with the Samsung Lions.

Over the weekend, the Lions, too, lost their weekend series 2-1 to the Kiwoom Heroes at Gocheok Sky Dome, while the Kia Tigers lost their series to the NC Dinos.

After a day off on Monday, the 10 KBO clubs are back in action today. At Jamsil, the Bears will host the Kia Tigers, while across the city at Gocheok Sky Dome, the Heroes will host the Twins.

At Munhak Baseball Stadium in Incheon, the Wyverns will host the Eagles, while the Lions will welcome the Dinos in Daegu.

The Giants are in Suwon to play a three-game series against the Wiz.