Child care leave taken by fewer than may want it

Child care leave taken by fewer than may want it

Paid child care leave of up to one year is a government policy granted to any parent in Korea with a child under the age of eight. But fewer than half of Korean companies surveyed said their staff take advantage of the benefit, according to job search website Saramin.

The company surveyed human resources managers from 971 local companies. Of them, 48.9 percent said they have female employees who have taken child care leave. 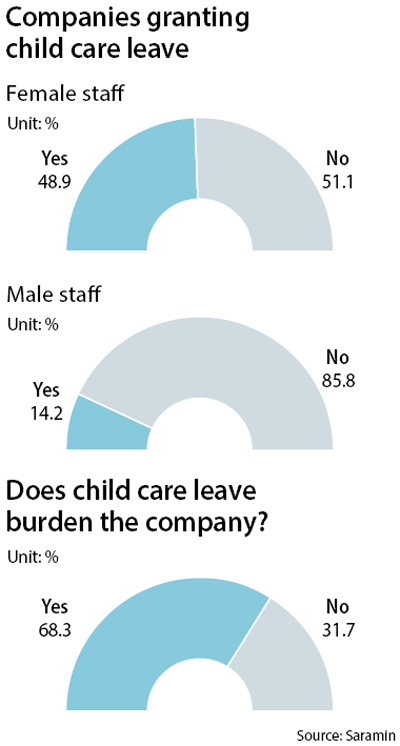 Much depends on company size. Among larger companies, which are typically more careful in following government policy, 85.6 percent said they had female employees who have taken legal time off for their children. But for small and medium-sized companies, the number was 42.4 percent.

The study also asked how many companies had female staff who took child care leave right after taking a three-month maternity leave. At the 971 companies surveyed, 6 out of every 10 pregnant female employees were doing so. Among large-sized enterprises, the average was 66 percent, while for smaller companies it was 54.2 percent.

Even for male staff who took advantage of child care leave, the average duration was 6.6 months shorter than the 9.5 months taken on average by female workers. Employees can choose how long they want to go on leave for and often negotiate before doing so.

In other local surveys, many employees have said that they are hesitant to take the leave because of the negative attitudes toward the benefit on the part of companies.

The Saramin survey backed their findings.

Seven of the 10 human resources managers surveyed said staff applying for child care leave feel like a burden to the company. About half of them, 50.4 percent, said it would lead to work overload for the remaining employees. A total 48.3 percent cited the costs and time spent to hire a temporary replacement. Multiple answers were allowed.

In fact, 28.1 percent of the 971 companies had worked to limit requests for child care leave. More specifically, 34.4 percent said they forced staff to withdraw the request, while 22 percent made them reduce the period. According to law, the company should accept what is requested by the employee.