North Korea fires another projectile, this time from west coast

North Korea fires another projectile, this time from west coast 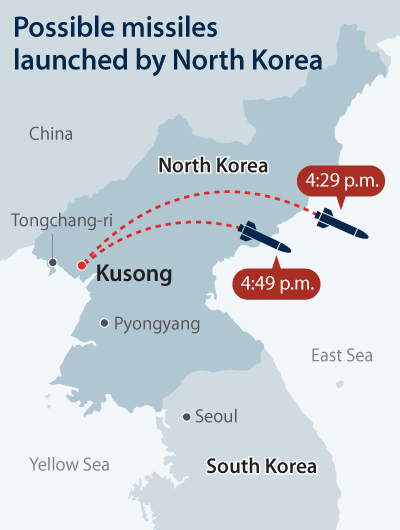 North Korea launched an unidentified projectile from a site on its western coast Thursday afternoon, according to South Korean military authorities.

In a text message sent to reporters, Seoul’s Joint Chiefs of Staff said the North fired a single projectile at around 4:30 p.m. in an eastern direction from a site in Sino-ri, North Pyongan Province, located only miles from its recently restored Sohae Satellite Launching Station in Tongchang-ri.

As of press time, it was not known exactly what type of rocket was fired or how far it flew, and the South’s military said it was verifying the facts. Analysts said the projectile in question was likely to be a ballistic missile, given that it was fired from the west coast in the direction of the East Sea, possibly going across the entire country and flying at least 400 to 500 kilometers (248 to 310 miles).

The launch came only five days after Pyongyang fired a host of projectiles from a base near Wonsan, Kangwon Province, on its eastern coast last Saturday that included what the U.S. Department of Defense on Wednesday labeled a “rocket and missile.”

Sino-ri is believed to house a regiment-sized military base equipped with Rodong-1 medium-range ballistic missiles (MRBM), identified last January through satellite footage by experts at Beyond Parallel, a program of the U.S.-based Center for Strategic and International Studies (CSIS).

The experts called the base there “one of the oldest of approximately 20 undeclared missile operating bases” in the country, which apparently serves as a key site from which Pyongyang would, in the event of war, exercise nuclear or conventional first-strike capabilities at targets across the peninsula.

Rodong-1, also known as the Hwasong-7, missiles are ballistic weapons that the North developed in the mid-1980s as an adaptation of the Soviet Union’s so-called Scud missiles. According to a U.S. government estimate from 2006, Pyongyang is believed to own around 200 of these weapons, some of which have a range of about 1,200 to 1,500 kilometers – enough to target the entirety of the Japanese archipelago.

If the projectile fired on Thursday was indeed an MRBM, the North may have dialed up its provocations toward the United States and South Korea far beyond the level it displayed last week, which prompted alarm but also tolerant reactions from Seoul and Washington. That good will, however, may have gone up in flames with this newest launch.