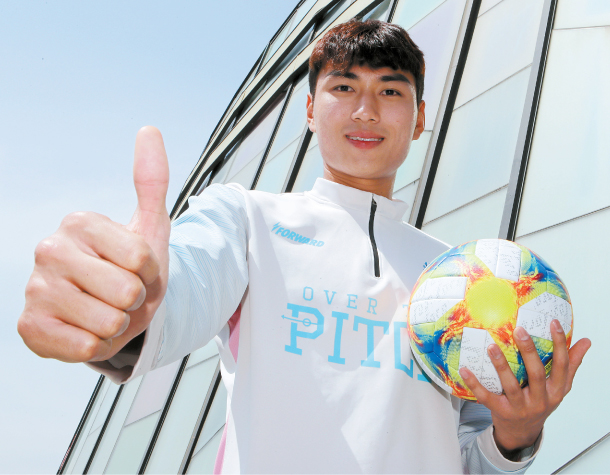 For professional athletes, getting traded comes with the territory, but it’s still not a nice feeling - especially after their rookie season. But for Jeong Tae-wook, being traded to Daegu FC this season has truly given him an opportunity to expand his professional career.

Although Jeong made his pro debut with Jeju United with high hopes last year, it wasn’t until Wednesday that he finally scored a goal on the professional stage. During Daegu’s Asian Football Confederation (AFC) Champions League Group F match against Melbourne Victory at DGB Arena, Jeong scored the header to help Daegu to a big 4-0 victory.

“Since we practiced that in our regular training sessions, it was like a guaranteed play,” Jeong said. “Before the match, head coach Andre [Luiz Alves Santos] told [Kang] Yun-koo to aim for my head in corner kick situations. I was really happy that I was actually able to score a goal from it.”

A win allowed Daegu to be ranked second in Group F at nine points. Before the match, Daegu was ranked third. As only the top two teams from each group advances to the knockout stage, in Daegu’s final Group F match against Guangzhou Evergrande FC on May 22, they only need a draw to secure their spot.

Having played for Korea’s junior national team in every age division, Jeong was expected to be the next big Korean center defender, but until last year, he was an unknown rookie in the K League. As he played for Jeju’s youth program, Jeong turned pro with Jeju United last year.

Despite the high expectations that Jeong would make an immediate impact with Jeju, he was hardly ever seen on the pitch. Throughout the 2018 season, Jeong only competed in five matches and was substituted in all of them. At the time, he was evaluated as a good player but didn’t get along with the team’s strategy as he was slow.

“Since I had high expectations [for myself], I also had a lot of disappointments,” Jeong said. “I wasn’t sick or anything at the time, so I told myself to use that time to work on my weaknesses.”

Jeong went to the weight training center two to three times a day to gain muscle. At night, he ran around the city of Seogwipo in Jeju to improve his endurance. Then, to increase speed, he practiced running with smaller steps.

Despite being given very little time to play for Jeju, his hard work still paid off as he was added to Korea’s U-23 national football team squad for the 2018 Asian Games and won gold.

Following the Asian Games, Jeong was given another chance to expand on his career in the K League by joining Daegu. At the time, Jeong’s potential caught the eye of Cho Kwang-rae, the president of Daegu FC.

“When I asked Asian Games head coach Kim Hak-bum about Jeong, he complimented him highly saying that he is a great player,” Cho said. “He also mentioned that, since he has speed, if he gets proper training, he’ll become a great help to the team. After I heard from Kim, I immediately thought that he’s a player that our team needs and started working toward adding him.”

As a result, Daegu traded Jeong Woo-jae with Jeong Tae-wook in January.

Since Daegu is playing in the AFC Champions League, K League 1 regular season and in the FA Cup, Jeong Tae-wook was given a chance to play earlier than expected. Jeong debuted for Daegu during the FA Cup round of 32 match against Suwon FC on April 17.

“Since I didn’t get to play a lot last year, I told myself that I won’t let go of the chance of getting on the pitch with Daegu,” Jeong said. “It’s all because I didn’t make any mistakes in the first match that our head coach allowed me to play. My year with Jeju helped me a lot.”

Although Jeong is a defender, at times, he engages in offense as well. Using his height as an advantage, Jeong spends a lot of time practicing headers. When Daegu’s regular training is done, he often stays on the field a little longer than the others to practice headers with the coaches.

“I’ve gotten a lot more accurate,” Jeong said. “It may be because I’m a defender, but when I score, it’s thrilling. I think I have a killer instinct.”