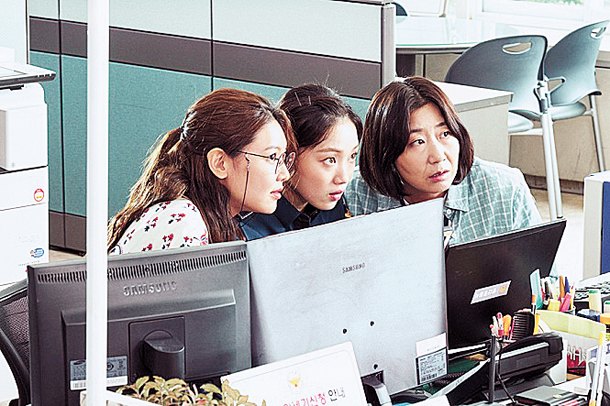 Local movie “Miss & Mrs. Cops” found itself in the middle of a battle between female fans and male critics after its release on Thursday.

On its premiere date, the female-centered flick “Miss & Mrs. Cops” climbed up the box office rankings to take its place behind “Avengers: Endgame” on Friday.

According to the Korea Film Council, the film had sold over 80,000 tickets on its first day, replacing “Inseparable Bros,” which was released on May 1, in the No. 2 slot.

The film, featuring stars Ra Mi-ran and Lee Sung-kyoung, is about two police detectives who try to solve a sexual assault case.

Despite the good box office, the average online score the movie has received on Naver is 5.61, a result of contradictory reactions from male and female viewers.

According to Naver statistics, men have given 1.6 stars out of 10 on average while women have given the film a high score of 9.58. The contrast between two genders is mainly due to the sensitive social issues of sexual harassment in the movie.

According to an audience analysis on the CGV website, women viewers made up 76 percent of the film’s total reservations, while young moviegoers in their teens and 20s gave 99 percent and 96 percent out of 100 ratings respectively in the Golden Egg index, which is a special film grading system made by CGV based on an algorithm of moviegoers’ reviews.

The positive reviews mostly praise actors’ performances and its timely themes. Others have commented that the story lacks ingenuity or authenticity with its predictable story line.

“Avengers: Endgame” remains strong at the local box office, having sold a total of 12 million tickets.