Culture is the constant in the Korea-Japan relationship

Culture is the constant in the Korea-Japan relationship

Despite frequent ups and downs in the diplomatic relationship between Seoul and Tokyo, their cultural ties remain solid and are growing even more, the head of the Korean Cultural Center in Japan said Friday. 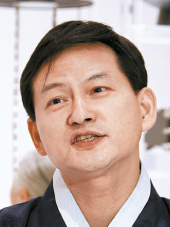 “I could feel that Hallyu is facing a new boom in Japan,” Hwang Seong-woon, the head of the Korean Cultural Center in Japan, said in an interview with Yonhap News Agency and other news outlets, recalling his experiences here.

Hallyu, or the Korean Wave in English, refers to the global boom of Korean pop culture.

He said a record 82,000 people visited and enjoyed a Korea-Japan cultural festival the center hosted in 2018, while Seoul and Tokyo were caught in a diplomatic row stemming from the history of Japan’s colonial control of Korea from 1910-45.

“The popularity of K-pop groups is phenomenal here. ... BTS, for example, is planning Japanese performances for July, having successfully staged a Japanese dome concert tour from late last year to early this year, [selling] some 380,000 seats,” he said.

“It is no more surprising that key Korean music groups take No. 1 on Oricon charts when they release albums,” Hwang said. “I think there are more Japanese people who view the political rifts and the cultural and human exchanges separately.”

This week, the Korean Cultural Center celebrates its 40th anniversary with a special exhibition on Korean traditional handicrafts and a music concert featuring instruments from both countries.

Japan has been a major consumer of Korean culture.

That was why Korea chose Tokyo as the first destination for Korean cultural diplomacy four decades ago.

The Korean Cultural Center in Japan was established in May 1979 as Korea’s first overseas body to promote Korean culture worldwide.

With the start in Japan, Korea’s global network has grown to 32 state-run Korean cultural centers in 27 foreign countries, including the United States, France, Vietnam and Argentina.

“[The centers] have so far served as the foothold for promoting Korean culture worldwide and played a role in the spread of Hallyu,” he noted.

Hwang also said Hallyu is now bringing other Korean cultural content, like films, computer games and literature, to the attention of the global audience of late, including in Japan.

Encouraged by such developments, the center, located in Tokyo’s bustling Shinjuku District, has worked to introduce a new variety of Korean cultural content to Japanese people, including Korean food, animation and globally celebrated K-pop music, according to Hwang.

“Thanks to Hallyu, an increasing number of people around the world have developed an interest in Korea and Korean culture,” he said. “I am sure it has contributed to going beyond the cultural supremacy of the Western sphere and expanding the cultural diversity of humankind.”