A battle for control of Lotte Card has dominated headlines in recent weeks, but the unexpected announcement of a little-known potential buyer has raised questions over Lotte’s intentions. 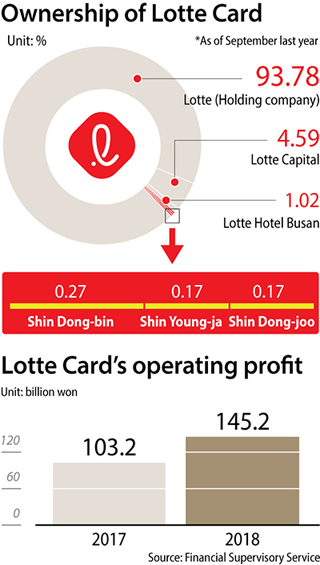 Some industry insiders suspect that the choice has been made so that Lotte can buy back the card issuer at a later date instead of completely selling it off.

“Typically, private equity firms take a conservative approach in pricing because their overarching goal is to get a cheaper price and sell it later at a higher price,” a source in the financial industry said.

“But the reason for the bold bet could be that there is something akin to a stock parking deal where Lotte will buy the affiliate back later,” the source said.

Both Lotte, a holding unit with a 93.78-percent share in the card unit, and Lotte Card declined to answer questions about the deal.

But since Lotte had no choice but to sell the card unit due to existing regulations, speculation that the chaebol could be seeking an option that didn’t involve it losing control forever has gained traction with observers.

The retail-focused group is required by law to sell its controlling stakes in financial affiliates as part of a corporate governance switch into a holdings company structure.

Under the Fair Trade Act, it is ordered to offload its stakes in all financial affiliates by October 2019.

Another homegrown private equity firm was chosen as preferred bidder for the sale of Lotte Insurance last week.

JKL Partners is reported to have offered to purchase a 58.5-percent stake in Lotte Insurance for 427 billion won. Again, the numbers don’t seem to add up - the insurance company is valued at around 730 billion won.

Others, however, didn’t buy into the theory.

“I don’t see a card company as being so attractive it would push Lotte to buy it back because of lower commission fees and lower margins,” said a source in the credit card industry.

“Some say the group will get Lotte Card back after establishing a sub-holding unit that controls financial affiliates,” the source said, “But the bill to allow for such a holding unit is pending at the National Assembly.”

The prospect for the sales deal took a new turn this week when it was revealed Hahn Sang-won, CEO of Hahn & Company, is accused of tax evasion.

If convicted, it could be tough for the deal to pass the screening procedure conducted by the country’s financial regulator.

Hahn & Company, however, said that the deal was carried out properly.

"Every aspect of acquisition transaction between Hahn & Company and KT / NasMedia (KT affiliate) was carried out in a manner transparent to all stakeholders, fully compliant with the relevant laws, and based on fair market value," the investment firm said in a statement.

Though little known to the public, Hahn & Company is a major private equity player in Korea with holdings in Woongjin Foods, SK Shipping and SSangyong Cement. Yet it doesn’t invest in financial firms, according to the portfolio on its website.