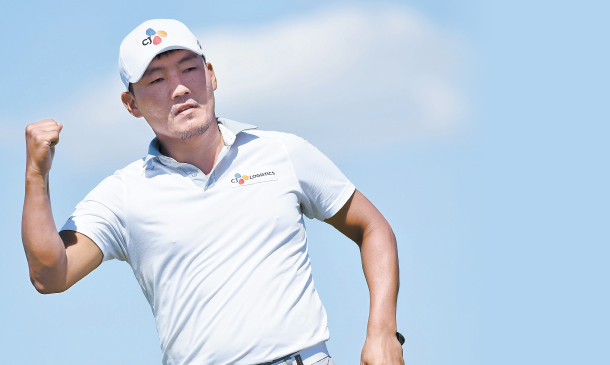 Kang Sung-hoon celebrates during the final round of the AT&T Byron Nelson at Trinity Forest Golf Club in Dallas on Sunday. [GETTY IMAGES/YONHAP]

Kang Sung-hoon finally lifted a trophy for the first time at the end of his 159th tournament on the PGA Tour.

By finishing the tournament at 23-under par, Kang finally picked up his first-ever win on the PGA Tour at the AT&T Byron Nelson at Trinity Forest Golf Club in Dallas on Sunday.

With seven birdies and three bogeys in the final round, Kang shot four-under par, 67, to finish two shots ahead of runners-up Matt Every and Scott Piercy, both of the United States.

“Dream come true,” Kang was quoted as saying on PGA Tour website. “When I just started playing golf, I really dreamed about this, winning a PGA Tour event, and it finally happened.”

Throughout the tournament, Kang had his ups and downs. Having shot a 10 under par, 61, during the second round to tie the course record, his third round was a lot tougher than expected.

Due to hours of rain delay during the third round, Kang had to hang up his clubs on Saturday after playing just nine holes as the tournament was suspended due to darkness. Despite starting the third round with a four-shot lead after the first nine holes, Kang dropped a spot to second, one shot behind Every. But a two-under par on his next nine holes of the third round on Sunday morning allowed Kang to start the final round as sole leader, three shots ahead of the field.

Yet Kang slowly made his way up the leaderboard in the second half. While he was closely competing for the lead with Every, Kang finally brought back his lead with a birdie on the par-4 14th. Then he added two more on the next two holes to extend his lead by two, en route to the first win of his career on the PGA Tour.

“I knew that was going to be the most important putt for this week,” Kang was quoted as saying on the PGA Tour website. “I had a read from him and I was really going to make this one in. This probably will give me the trophy. I really focused. I just saw the picture and went in.”

Since Kang’s amateur career, he’s been a well-known player in Korea. He helped Korea win gold in the team event at the 2006 Asian Games in Doha, Qatar, and that year he won a KPGA Tour event as an amateur. Following his win, Kang turned pro, making his debut on the KPGA Tour. In his second year, in 2008, Kang picked up his first win on the KPGA Tour at the Eugene Securities Open. He then expanded his career and attempted to join the PGA Tour by earning his status card through the qualifying school, joining the tour in 2011.

Although Kang failed to retain his PGA Tour card and played on the Web.com Tour from 2013 to 2015, he still won the Asia Tour’s CJ Invitational Hosted by K.J. Choi and Kolon Open in 2013.

It took Kang a while to make his way back to the PGA Tour, but throughout that time, he never stayed discouraged. As he is considered shorter compared to other players on the tour - at 1.72 meters (5 feet 8 inches) tall - Kang spent a lot of time practicing hitting his drives further. To do so, he worked on his drives for 12 hours a day and, as a result, the distance increased significantly from 285.7 yards in 2012 to 292.4 yards in 2016 on average.

His hard work also paid off on the PGA Tour. Having returned to the tour in 2016, Kang had his best season in 2017, recording a runner-up finish at the Houston Open. This year he is having an even better season, recording three top-10 finishes including a win.

With a win, Kang took home the prize money of $1.422 million and became the sixth Korean golfer to win a tournament on the PGA Tour. A win also allowed Kang’s world ranking to jump up 62 spots, to No. 75.

Among the Korean golfers, Kim Si-woo had the highest ranking at 53rd, followed by An Byeong-hun at 57th and Im Sung-jae at 60th.