Kakao Bank, the country’s largest online bank, was profitable in the first quarter, just 18 months after it started operations.

Most pundits thought it would take three to seven years to start making money. 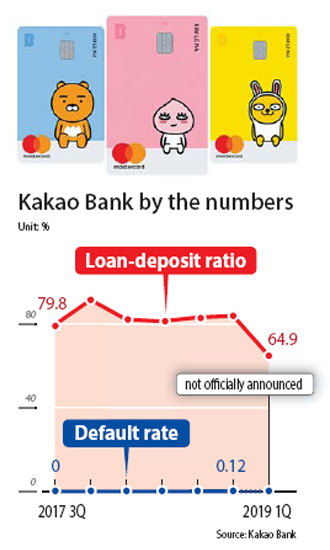 According to a first quarter financial report filed with the Financial Supervisory Service on Tuesday, Kakao Bank recorded 6.6 billion won ($5.54 million) in net profit in the first quarter compared to a 5.5 billion won loss a year earlier.

“The reason our company was able to turn to profit was because our loan portfolio increased rapidly, and profits from interest rose accordingly,” said a spokesperson for Kakao Bank. “In the first quarter, there weren’t too many costs, so we have to see whether the profit will continue in the second quarter.”

Kakao Bank’s loans totaled 9.67 trillion won in March, up 65 percent compared to a year ago, and up 6.4 percent from the end of last year.

That loan growth was the fastest among Korean banks.

While the bank’s loans increased 6.4 percent in the first quarter compared to the end of 2018, its deposit rose over 4 trillion won, or 37.7 percent, in the same period. Commercial banks struggle to prevent their loan-deposit ratio from exceeding 100 percent, but Kakao Bank, being a newcomer, still has to get the ratio up.

Kakao Bank is also seeing a low delinquency rate on its loans: 0.12 percent at the end of last year, half the average of 0.24 percent for the big four commercial banks in 2018.

Kakao Bank expects to have more than 10 million customers within this year compared to 8.91 million last March.

Kakao Chairman Kim Beom-su’s alleged violation of the Fair Trade Act was a barrier in the past. The law stipulates that the largest shareholder of an internet-only bank can not violate laws related to finance or the Fair Trade Act and not receive a criminal penalty in five years.

On Tuesday, the Seoul Central District Court acquitted Chairman Kim of violating the fair trade act. The court accepted Kim’s claim that the violation was caused by a mistake by an employee.

The ruling paved the way for Kakao to increase its stake in the bank to 34 percent from 10 percent.

“Whether Kakao becomes the top shareholder is an important factor for growth at Kakao Bank,” said Oh Dong-hwan, an analyst at Samsung Securities.

“If Kakao becomes the largest shareholder, it could play a more active role [in management of Kakao Bank].”