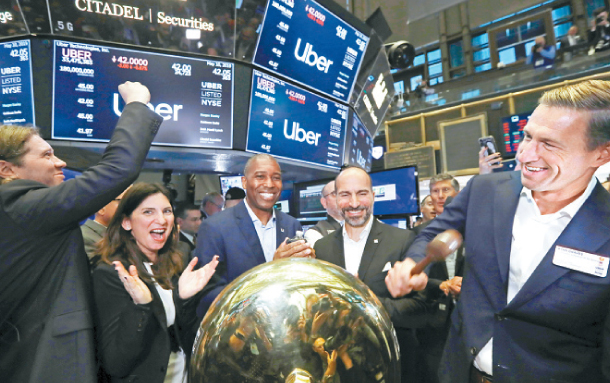 Uber board member Ryan Graves, right, rings a ceremonial bell as the company’s stock opens for trading during its initial public offering at the New York Stock Exchange on May 10.

CHOI JI-YOUNG
The author is head of the industrial 2 team at the JoongAng Ilbo.

“Someday, companies like Uber could control all mobility data in Korea. For local companies like Tada to survive, we need to focus on securing more customers and analyzing more data.”

As VCNC CEO Park Jae-uk, who leads the Tada ride-sharing company, said in an interview with the JoongAng Ilbo in February that Uber — the biggest ride-sharing service in the world — is both admiration and a fearful rival. Yet Uber’s current situation compels many interested in the future to think about it despite the expectation that ride-sharing would not just change mobility but also society as a whole.

On May 10, Uber went public in the New York Stock Exchange, priced at $45 per share. On the day of initial public offering (IPO), it fell by 7.6 percent. $655 million of investors’ money vanished that day. Reuters cited University of Florida Prof. Jay Ritter’s analysis that Uber became the company that suffered the steepest fall of shares in the history of IPOs in the United States.

As the trade war intensifies between the United States and China, stock markets in the United States are not in a good situation. Yet more people attribute the dramatic fall of Uber’s shares to a lack of conviction in the future of the company. According to CNN and Market Insider, Uber spends far more than it earns, spending a whopping $3.2 billion, or 28 percent of its revenue, on marketing last year. In contrast, it spent 13 percent of its revenue on research and development (R&D) for new innovative services.

That is in sharp contrast to Facebook, which spent 20 percent of its revenue on R&D in 2012 when it went public.

As the United States tends to highly value the potentials of IT and innovative companies, the market’s demand for profits from the moment of the IPO is relatively low.

Yet the problem is that Uber cannot answer investors’ questions: “It’s OK that you are not making money now. But when will you?”
Uber’s stock price can rise anytime. On May 14, it went up by 7 percent. Uber CEO Dara Khosrowshahi encouraged employees with a message that Amazon and Facebook also struggled after their IPOs.

Nevertheless, the sharp drop in Uber’s shares tell us that even a company at the forefront of innovation could quickly lose the trust of investors. It is a lesson to be learned by Korean start-ups hoping to get funding, go public and become market giants.