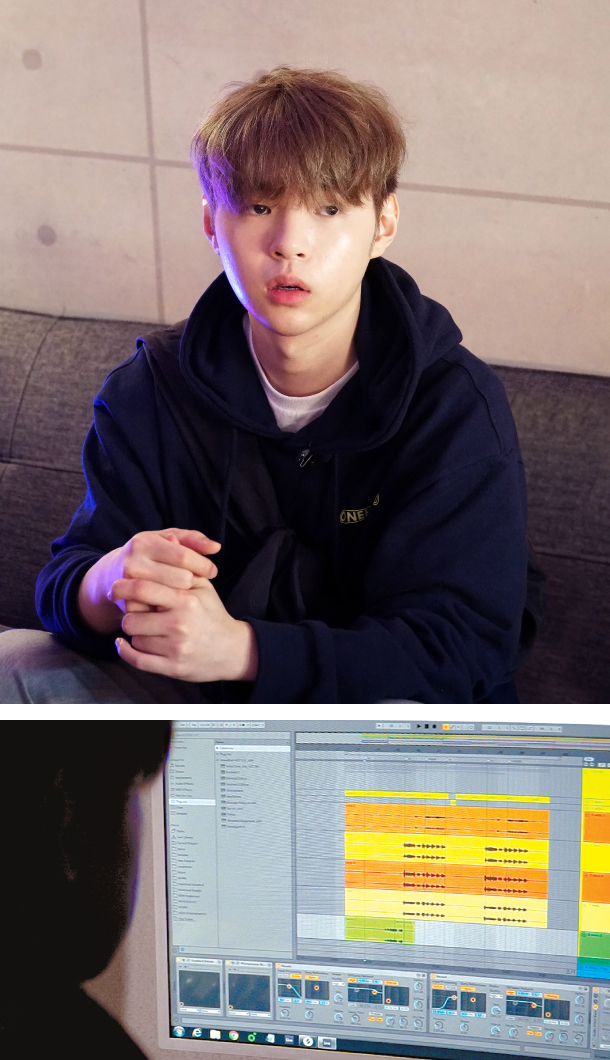 Producer Boycold in his studio in southern Seoul, top. When he concentrates, it takes less than two days to make a song, above. [JEON TAE-GYU]

Just as painters sign their names at the bottom of their pieces, music producers add their own signatures to the songs that they make. In recent years, that autograph has usually been put at the top of a track, a wink to listeners in the know who is behind the music they’re listening to. Among the most memorable signature sounds in Korean music today is one made by rising star and producer Boycold.

When a young woman’s voice blandly utters the short phrase, “Hey boy, it’s cold,” listeners know that the song has been made by Boycold, a 24-year-old producer who has been making a name for himself in recent years with his distinct electronic hip-hop sound. Few listeners know that his signature sound is actually the voice of popular ballad singer Younha.

Since debuting in 2015, Boycold has been considered one of the most promising talents in songwriting. He may not have a long list of hit tracks under his belt yet, but those who have heard his songs know that he is consistent.

Boycold wrote his first song “Boys to Men” in 2015 for rapper Crucial Star’s EP “Boyhood,” and has been working as a music producer since, mainly in hip-hop. Although he doesn’t necessarily limit himself to one genre, it was through making beats for Mnet’s hip-hop audition program “High School Rapper 2” in 2017 that people began to recognize Boycold’s name and sound. Vinxen’s “Blame” (2017) and Haon’s “Adios” (2017) were created by the hands of the talented producer for the semifinals of the second season. He also produced Sokodomo’s “Freedumb” (2018) for the semifinals of the third season of the show.

It was producer duo GroovyRoom - his longtime friends and colleagues - that asked Boycold to make songs for the semifinals, which he recalled being “a grateful opportunity.”

“It was actually really hard, because I was given such a short amount of time,” he said. “I had to make songs for two people within a week, which was really challenging. Looking back, it was a fun experience. It was hard and very rushed, but still fun. [GroovyRoom] asked for my help again for the third season [of ‘High School Rapper’], and I gladly said yes.”

Having made songs that put wings on other people’s dreams, Boycold released his very own EP “Post Youth” on April 29, signaling a new chapter for his career.

The Korea JoongAng Daily met with the producer at the studio that he shares with GroovyRoom in southern Seoul. The following are edited excerpts from the interview.

Q. You recently dropped your very first EP. What was it like making your own album when you have only worked on other people’s work in the past?

A. I’ve produced singles in the past, but this is the first time I made an album. I was filled with so many emotions. I usually produce music for other people, and it was the first time to have my album and have other artists come and participate, instead of the other way round. It was fun, but also very tiring. I felt really proud, but at the same time exhausted, because I put so much energy into it. I feel like I have taken my first official step as an artist.

I would give it a 5 out of a 10. I’m going to have more albums in the future, so I can improve with them.

My first single was titled “Youth” (2018). I wanted to keep in line with the idea of youth, and I thought about how to name my new album. You use the word “post” when you can’t exactly name something to replace that word, like postmodern. So I thought, let’s call it “Post Youth,” because you can never replace your youth. It means that it’s the step that comes after youth.

I actually came across the phrase, “Youth has no age” by Pablo Picasso while I was working on the album. It really touched me, but I think it may have looked cool just because Picasso said it (laughs). But I had actually been thinking about how to spend my youthful days right - or at least how to spend it without regret. His phrase made me realize that it’s OK as long as you keep your senses young.

How was making your own album different from producing on other people’s work?

The biggest difference was that, when you’re working on other people’s albums, they already have a certain character they want to go with. I just have to develop a song from that [theme]. But I had to start from scratch, make something out of nothing, and then find the people to suit that. The song I first wrote, “Umm” is something that I started writing two years ago. I wrote it, then came back to rearrange it later.

Does it usually take a long time for you to write a song?

Actually, it’s different for each song. When I’m working fast, it takes less than an hour. But if I take a long time, I could think over something that I made two years ago again and again. It can be hard to come up with a whole new concept at the beginning, but once I get started, it doesn’t take that long - no more than a day or two.

As a producer, do you have any regrets not being able to sing or rap yourself?

I actually wanted to rap. I’m really bad at singing, so I never thought about that, but I wanted to rap. Since I can make music, I thought that I could become someone like Tablo, who makes his own music and raps it as well. I started off like that, but then I realized that it was a really tough fight, and I wasn’t going to have a chance like this. I needed to focus on just one thing that I’m good at. So I steered my direction toward producing, because I was better at that.

You recently held a listening session of your new EP with fans. Do you feel disappointed that you don’t get to meet your fans directly on stage?

I think it’s my fate as a producer. I don’t think I’ve felt disappointed in that. I actually didn’t feel the need to meet with fans in person because I didn’t get a chance to. But the company told me that it would be a good idea to hold a listening session [since it’s the first EP]. The session was actually very nice. It was nice to talk to the people I would usually just communicate with online through messages. I would like to do it again, if I’m given another chance.

Producers don’t usually become well-known in Korea. How did you manage to get your name out as a producer?

I want to change that. I think it’s all about timing. If people are thirsty for the things that you can give them at the right time, then that will do. But if not, then they aren’t [interested]. I’m going to try a lot myself, but I don’t think it’s going to change in the blink of an eye.

What kind of a producer do you want to be known as?

As much as I’m grateful for being called “trendy,” I actually don’t like that. It has the connotation of being forgotten soon. I want to make music that’s somewhere between trendy and vintage. There are songs from four to five years ago that you still listen to - I want to be like that, have that classic touch.

I would like to be “a producer who makes good albums.” There are so many people who make good music. I think my strong point is in that I have the ability to design new ideas, like the two collaboration projects “Boycold” (2017, Sik-K) and “Boycold 2” (2018, Vinxen). I want to prove myself as a producer who comes up with new ideas for an album and does it well.