The dansaekhwa conundrum: Monochrome master reflects on complexity of his simplicity

The dansaekhwa conundrum: Monochrome master reflects on complexity of his simplicity 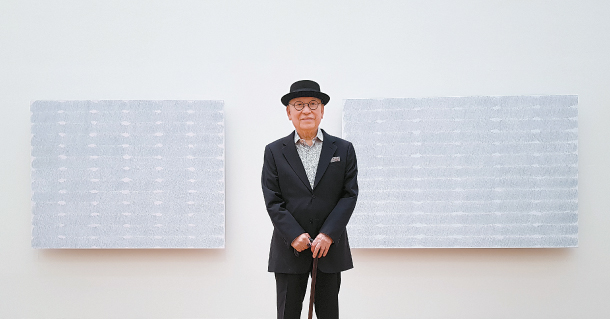 Park Seo-bo, the 88-year-old master of dansaekhwa, Korean monochrome painting, poses with recent works at the MMCA in central Seoul. They are part of his retrospective, which runs through Sept. 1. [MOON SO-YOUNG]

“I’m often described as if I were a horned dokkaebi goblin. Yes, I came here after shaving my horns during my morning shave.”

Park Seo-bo, 88, a master of dansaekhwa, or Korean monochrome paintings, started his May 16 press meeting with this joke. The gathering was held at the National Museum of Modern and Contemporary Art (MMCA) in central Seoul two days before his large-scale retrospective kicked off at the museum.

His joke contains an element of truth. Park has been admired as a pioneering figure in Korean abstract art and as one of the founders of the dansaekhwa movement, which started in the 1970s and recently gained international recognition. In dansaekhwa abstract paintings, the artist scribbles, brushes, rubs or tears a canvas and uses a single color or limited colors - the attitude is monastic.

Park is an educator and promoter of contemporary Korean art, but he has been criticized for forming and leading a faction of graduates from Hongik University, where Park studied and subsequently taught, and for wielding enormous power in the local art world.

“He was criticized for forming a collective power and for standardizing contemporary art” in Korea, art historian Kwon Young-jin wrote in the exhibition book. “But, at the same time, he maintained artistic integrity.”

Without knowing Park, it is difficult to explain the history of 20th-century Korean art. And the new retrospective at the MMCA Seoul - titled “Park Seo-Bo: The Untiring Endeavorer” - will help the public get to know the artist.

The exhibition features more than 160 artworks and archival materials, ranging from Park’s earliest works in the ’50s to recent work from 2019. It is divided into five sections, each one of the artist’s five periods. 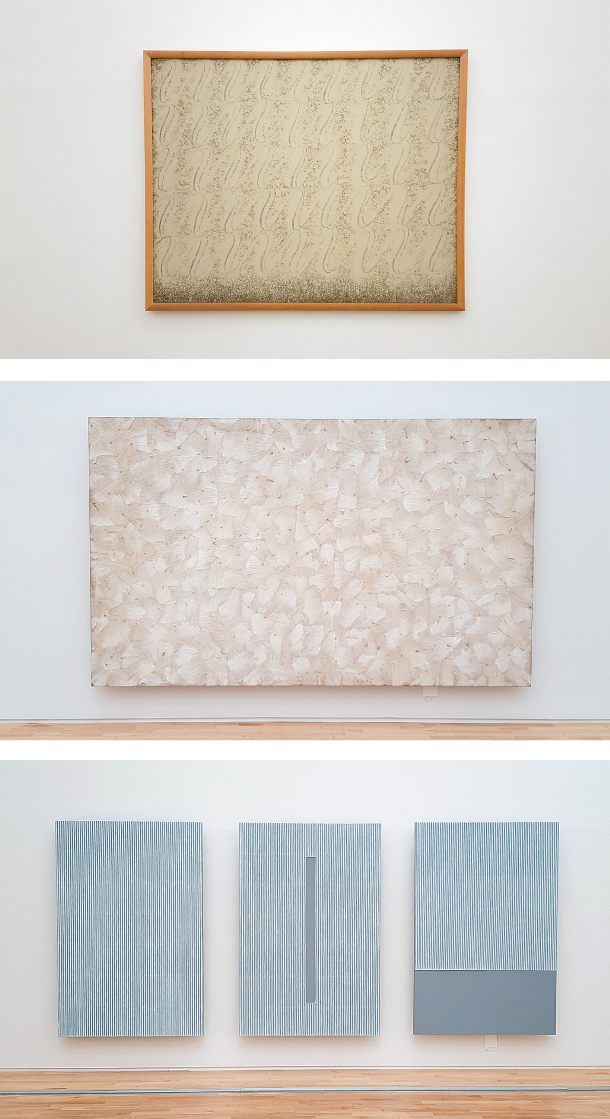 “We intend to present the ‘late-ecriture period’ works in the natural light that comes through the skylight,” explained Park Young-ran, the MMCA curator of the exhibition.

Park’s iconic dansaekhwa paintings, described in the French word “ecriture” - which translates as handwriting or exercise in English - were inspired by his young son practicing his handwriting: writing and erasing. He began to apply countless pencil lines on a canvas painted in white. These are works of the early-ecriture period.

Then, in the ’80s, he began to take a new approach that involves making maximum use of Korean dakjongi, or traditional mulberry paper, through repeated rubbing and scratching. He went from the utterly-colorless early-ecriture works to adding color with the use of wormwood, tobacco and other materials.

Since the mid-’90s, the late-ecriture period’s beginning, he has removed any traces of the human hand from his works, using sticks, rulers and other tools to create furrow-like spaces at regular intervals while applying deeper, richer colors.

“From that period, I started being helped by assistants, so the works were not for my own practice but for the benefit of the viewer,” Park said. He seems to have considered the question of how dansaekhwa made by assistants can still be dansaekhwa, as the artist’s self-discipline and dedicated practice are considered essential to the art form.

The works were in danger of possessing a manufactured quality, Park continued. “So I developed new works I can do with my old body without assistants.”

He pointed to two new paintings that prove that he continues at 88.